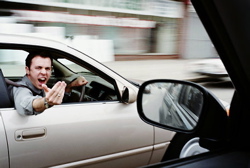 With drivers adapting and evolving to the technologies of texting, talking, and playing Call of Duty at the wheel, isn’t it about time we add another feature to the dashboard?  Well, that’s exactly what Intel and Google were thinking.  Gee, how do they come up with this stuff?  They’re always one step ahead of us.

Technology giants like Intel and Google are turning their attention from the desktop to the dashboard, hoping to bring the power of the PC to the car. They see vast opportunity for profit in working with automakers to create the next generation of irresistible devices.” – NY TIMES

Soon we will be able to check Jennifer’s pictures from Saturday Night’s shit-show, while making a wrong turn on a one-way street.  What’s important is that our technological innovations make everything more convenient for the consumer.  Plus it’s so damn cool!  That is of course assuming our safety is in no way in jeopardy.  Right Ford?

“We are trying to make that driving experience one that is very engaging,” said Jim Buczkowski, the director of global electrical and electronics systems engineering at Ford. “We also want to make sure it is safer and safer. It is part of what our DNA will be going forward.” – NY TIMES

“Even in 2003, when fewer people were multitasking in cars, researchers at Harvard estimated that motorists talking on cellphones caused 2,600 fatal accidents and 570,000 accidents involving injuries a year.” – NY TIMES

Wait a second.  They’re not trying to pull the wool over our eyes here, are they?

“This is irresponsible at best and pernicious at worst,” Nicholas A. Ashford, a professor of technology and policy at the Massachusetts Institute of Technology, said of the new efforts to marry cars and computers. “Unfortunately and sadly, it is a continuation of the pursuit of profit over safety — for both drivers and pedestrians.” – NY TIMES

That’s just a simple case of good old American business.  No foul play here.  Ah, it’s good to know that Capitalism continues to move our country in the right (and safest) direction.