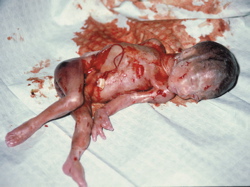 When politics can’t keep its head out of a court room.

Things are slowly getting out of control in Wichita, Kansas. Why? Because in the current case of Scott Roeder a confessed abortion killer (in other words one who goes around killing doctors who perform abortions…) the court room there has ruled that Mr Roeder can now use an idiosyncric defense which ostensibly mitigates his culpability of intended murder to that of manslaughter. Or as Associated Press further delineates for us:

A Kansas judge’s decision to allow a confessed killer to argue that he believes the slaying of one of the nation’s fewlate-term abortion providers was a justified act aimed at saving unborn children has upended what most expected to be an open-and-shut first-degree murder case.

Prosecutors have challenged the ruling that allows Scott Roeder to tell a jury that the fatal shooting of Wichita doctor George Tiller wasvoluntary manslaughter. A Tuesday hearing is scheduled to allow Roeder’s defense attorneys to respond.

Did we get that correct? Continues the report…

Some abortion opponents were pleasantly stunned and eager to watch Roeder plead his case. Tiller’s colleagues and abortion rights advocates were outraged and feared the court’s actions give a more than tacit approval to further acts of violence.

“This judge has basically announced a death sentence for all of us who help women,” said Dr. Warren Hern of Boulder, Colo., a longtime friend of Tiller who also performs late-term abortions. “That is the effect of the ruling.”

Mmmh, we wonder how this sudden change of heart from court has come about (in Wichita, Kansas of course…) and what this could suddenly portend to the community and those who seek to assist others have an abortion which from what we understand is still legal as much as many including anti abortion groups and the right wing would like to make illegal. So much for morals and religious beliefs…