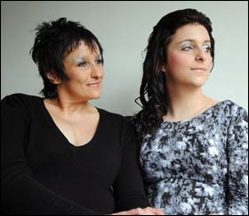 There seems to be a lot of brow beating over there in England right now as the National Health Service (NHS) has just agreed to pledge to pay for the cost of 16 year old Bradley Cooper‘s sex change operation. Although Bradley is personally relieved along side with his family who have had to watch him endure unrelenting hostility at school and deep personal anguish, campaign groups are now vocally voicing criticism and are seeking to have the decision reversed arguing that the money (10 000 pounds)  be better spent on more serious cases- people who desperately need treatment to stem cancer for instance.

Bradley, who calls himself Ria, has been dressing as a girl since he was 12. He would borrow his mother’s lipstick and wear clothes belonging to his three sisters, Claire, 24, Katy, 21, and 18-year-old Sophie.

He told the News of the World: ‘I know people might say horrible things like the money could be better spent on other things.

‘But this is my life, and it won’t be worth living unless I have that operation. The doctors have said I need the surgery for my own peace of mind.

‘I hate my body as it is now. I’ve known for years I’m a woman – I think and act like a woman, not a man. I don’t want years of misery.

So one hand you have a young man who is convinced on the inside that he is a woman and on the other hand you have a public who are either intimidated that homage is being payed (literally) to such beliefs, or at the very least suspicious that this could open the flood gates for other young people to seek sex change operations- when we all ‘supposedly’ know when a man is born a man they stay a man. Or so it seems…

‘People might think I’m too young to make such a huge decision but I know my own mind and this is what I want.’

‘People can have their own beliefs on whether they think this is a good use of NHS money but I just want what will make my child happy.’

Bradley is now waiting to see the Gender Identity Development Service, based at the Tavistock and Portman NHS Trust in North London.

Last year, German teenager Kim Petras, who was born Tim, became the world’s youngest sex-change patient after undergoing the procedure at the age of 16. She is now an aspiring model and pop star.

In any event time will tell if Bradley gets his sex change operation but one thing is for sure we doubt he will be aspiring to be a pop star- after all what would the British public think then?