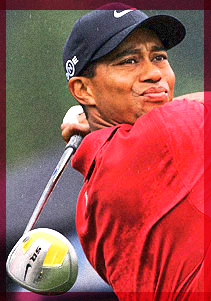 Doing the math in corporate deals.

Despite all the athletes that were riddled with accusations of cheating and other controversies that threatened their endorsement deals, Tiger Woods has slipped through the storm unscathed. However, he has now joined the ship of infamous athletes. Welcome aboard, Tiger.

What started as a car accident that had people worried, turned into an ordeal revealing that he was actually trying to escape his wife who was chasing him down with a golf club (the type of irony which we love). Then, it was revealed that his injuries were not completely from the crash but from his wife, Elin Nordegren, who “scratched up his face.”

It’s sad to know that America’s new beloved antihero was running away and hiding like a little puppy from his Swedish honey, but the next revelation was even more scandalous. It is being reported that he cheated on his wife several times with different women. Of course since then, many women have stepped out to claim that they too had a slice of the Tiger. Amidst all the heated debate interestingly enough both Tiger and his wife have remained mum.

Now details have come out saying that his wife will be offered $5 million in order to work on the marriage, with an additional $80 million if she stays with her husband for 7 more years.

Obviously this would necessitate Elin tuck away the golf club and plaster a new found smile on her face, and keep her mouth shut from the public. If she doesn’t make it to 7 years, still staying 2 more years will have her finding twice as much of her original pre-nup (which was $20 million for 10 years of marriage) sashay itself into her pocket.

Tiger Woods’ side thinks that by having his wife stand by his side, the corporate sponsors will not pull the deals, and will also help in shedding himself of his ‘cheating husband’ image. Will this tactic work?

Sponsors aren’t blind and deaf; they can see if Tiger is turning into the new Kevin Federline and still drop him. Either way, it’s a lose-lose situation for Tiger. Keep the wife in check and he’ll lose millions after 7 years. Rid himself of his wife for some new booty and he’ll lose millions from the sponsors who went bye-bye. Next time, try to keep your tiger in your pants, Tiger.

Prenup Deets! Tiger Pays Out To Stay In – Perez Hilton