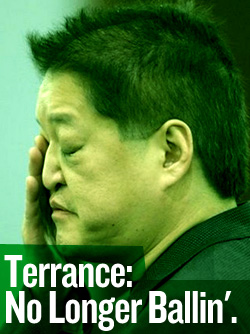 First we had people suing McDonald’s for making them fat, now a 52-year-old Omaha man, Terrance Watanabe, who lost $127 million at the Caesars Palace and Rio casinos in a year-long gambling binge, is suing Harrah’s Entertainment Inc., the owner of both casinos.

“His compulsion led him to practically live [sic] at the two casinos, sometimes playing roulette and  $25 multi-line slot machines for 24 hours straight, or playing three hands of blackjack – each with a $50,000 limit – simultaneously.”

Watanabe – who still owes $14.7 million and faces felony charges on four counts of intent to defraud and steal – pretty much sums up the definition of the term “high roller”, once losing a reported $5 million in a single day, and regularly handing out “bundles of $100 bills” to Caesars’ employees. The Wall Street Journal reports that Harrah’s “derived about 5.6% of its total 2007 Las Vegas gambling revenue from Watanabe alone.” One Vegas regular said that he was something of an attraction in himself, and that people “would go just to watch.”

The casinos responded by affording him every luxury in order to keep him dropping cash, including a free three-bedroom suite and a $12,500-a-month airfare budget. Because, people, that’s what casinos do.

“We are in the gambling business,” a Harrah’s representative said. “We had no reason to believe that Terry Watanabe was anything other than a big player with huge resources who made an adult decision to bet the money he did. Are we going to provide an environment that keeps him very happy? Of course we are.”

So far, so predictable. And Watanabe hasn’t got a leg to stand on, right? The story gets slightly less savory though when we learn that, according to the Journal, “several former and current employees of Harrah’s said they were told by their managers to let Watanabe keep betting even while he was visibly drunk, and were afraid they would be fired if they tried to prevent him from gambling,” which is not only immoral – Immorality in the gambling industry? Surely not – but in breach of casino regulations and state law.

So while Watanabe was banned from the Wynn casino for “compulsive drinking and gambling”, Harrah’s couldn’t see past the great big cartoon dollar signs obstructing their vision, and threw every incentive they could think of at him to keep him throwing his money right back.

So do we dismiss Watanabe as a hapless victim of vice, exploitation and corporate manipulation, or do we bang our heads against a wall one more time and wonder when people are going to stop trying to pass the buck on taking responsibility for their own actions?

In this particular case, it’s hard to find much sympathy for either party.