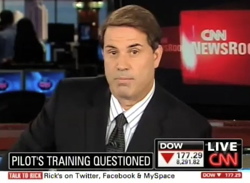 CNN’s Rick Sanchez has earned a reputation for eschewing cable news orthodoxy, particularly the blind-deaf-and-dumbness that passes for “objectivity” among those of his less competent colleagues who so readily let their guests get away with talking a great deal of demonstrable nonsense.

The anchor’s latest feat, available at the link page below, involves riding herd over Senator John Ensign, a Republican from Nevada who once claimed that Bill Clinton’s extra-marital dalliances meant that the president had “no credibility left,” who has spoken out against the prospect of gay marriage, and who has otherwise spent great portions of his career in such a way as to ensure that his own sex scandal – an affair with the wife of one of his aides – would be steeped in the same degree of irony as we find in pretty much every other instance in which some “family values” fascist gets caught valuing a nice piece of ass.

The interview begins with Ensign noting that terrorists are bad and that we should probably try to stop them while implying that some great number of his opponents believe that we should instead turn over the country to al-Qaeda, which is to say it begins in the same manner in which every interview with a Republican politician tends to begin. After sarcastically praising Ensign for having made “a good point,” Sanchez immediately shifts gears by asking the junior senator if he’s under investigation for ethics violations and if he got a job for his former top aide because he felt bad for having fucked his wife or because he wanted the guy to keep his mouth shut. Ensign replied by noting that a lot of people in his state are unemployed and that he would like to help end the “hurting.”

Poor Ensign, who’s already committed to a seven-minute interview, at first maintains that he won’t be talking about this or any of the other unethical things that he obviously did, but alas, he’s stuck with Rick Sanchez when he would have obviously preferred someone dumber – someone like Daryn Kagan, perhaps, the superbly inane would-be Oprah who left CNN in 2006 in the mistaken belief that the world needed yet another website revolving around inspirational-oriented bullshit.