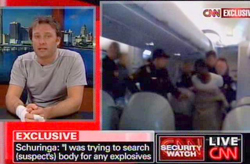 Fear and loathing of Nigerians.
If we could advise most Nigerian nationals this is probably not the best time to be flying into America and if you’re not sure why, perhaps this story below will help you if you happen to be Nigerian to understand why.
From news.com.au;
“…(a man) aged in his 30s, was detained after being in the bathroom on Delta/Northwest Airlines flight 253 for an hour, sources have told Fox News in the US.”

At the time passengers weren’t sure what to make of a Nigerian (who we can assume everyone was keeping their eye on following the arrest of Nigerian wackjob Umar Farouk Abdulmutallab, 23 (another Nigerian) for his attempted airline terrorists antics the day before when after a protracted trip to the rest room he failed to come back. With most passengers paying vigil to those around them, the sight of a missing man in the lavatory probably conspiring to blow them to bits was just too much. It of course generated an emergency response. Continues the report:

The plane landed safely and the man was detained.  The incident sparked a security scare because it took place on the same route, airline and flight number as that on which another Nigerian man allegedly tried to set off explosives on Christmas Day.

Of course as we all know Nigerians are simple people (idiots) and if they were tempted to strike again they would obviously pick the same airline company, flight number but different set of air passengers to torment. Why this didn’t strike the imagination of all the air passengers continues to baffle us…Continues the report:

However the FBI later released a statement saying the man was not a threat to the flight and was merely ill.  “The investigation shows that this was a non-serious incident and all is clear,” the bureau said.

But prey, why was the infidel ‘disruptive?’

Reports suggest he became abusive after being extracted from the bathroom while still unwell.

The moral of the story? If you are Nigerian stay home this Christmas and try avoiding having stomach aches whilst on future Delta flight numbers ending in 253, it will save you a lot of grief once you land…