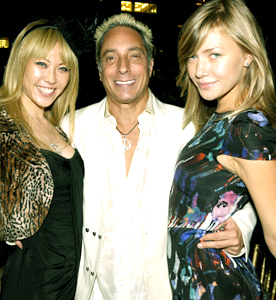 One of the last and by far most colorful event I attended at Art Basel Miami was Ivan Wilzig’s party at the Erotica Museum. Invited by a friend I made during Basel, I had no clue what to expect, although I had heard he had a penchant for excess…

I arrived to the location unaware that it was an Erotica museum. I was greeted by a full camera crew and people dressed as soldiers. My flight instinct and common sense kicked in but curiosity won out and I found myself pressing the elevator’s second floor button.

When I reached the second floor I was greeted by penises in every medium possible. Sculptures, paintings, and even a gold and diamond studded male member adorned every surface of the building. Body painted nude models were in boxes of sort and the guests were uh, enjoying the view.

Unfortunately, this is all back story and not the shocking aspect of the party. What caused me to be frightened for my life was the crowd in attendance. The Welzigs, a wealthy bunch invited their wealthy set of friends. The demographics were males over 50, females under 30. Arriving alone, I was like lunch meat to a bunch of starving prisoners. Within milliseconds of entering I was pounced on. In essence, it was old men and their pretty young things. Those without their arm candy were shopping around like it was a Black Friday Sale on Bugattis. In painful attempts to make conversation, one man turned to me and told me about a friend of his who bought a painting of Marilyn Monroe for one million dollars. He slyly looked at me and said ‘why buy a painting of a dead woman for a million when you can get a live one and give her the million dollars’. I backed away.

I will admit though that the Wilzigs know how to throw a party. There was a full bar, full band, and a full spread. The prettiest young thing and woman of the night, Naomi Wilzig was celebrating her 75th birthday. Dubbed, the “Queen of Erotica” her publicity loving son Ivan (who was coincidently dressed in head to toe in tie dye and a cape with a peace sign) and other family members toasted to her generosity and wonderful life. After hearing about her life and acts of selfless service, I was truly impressed and happy that their lives did not revolve around erotica, even if she did take her magic wand and tap one of the naked model’s ‘member’ and ask if she could make a wish.