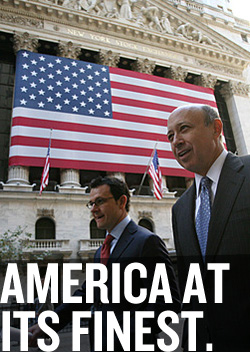 It seems that the once much adored private bankers and merchant bankers that the banking behemoth entity Goldman Sachs was once revered for has gone the way of sleazy fast fat profits which as we all know are very exciting for the balance book but not exactly so exciting with respect to the image of a blue ribbon dossier that for the longest time used to like to sell itself as a princely bottle of fine caviar without pepperoni on the side.
Reports the NY Times;

Interviews with nearly 20 current and former Goldman partners paint a portrait of a bank driven by hard-charging traders like Mr. Blankfein (the current CEO of Goldman Sachs)  who wager vast sums in world markets in hopes of quick profits. Discreet bankers who give advice to corporate clients and help them raise capital — once a major source of earnings for Goldman — have been eclipsed, these people said.

MMh- hard sought wagers, profit above image? Is this new face of Goldman exactly tolerable to the bankers who for generations before traders suddenly became the extended penises of the universe gave the word power and prestige a whole different meaning?

Discreet bankers who give advice to corporate clients and help them raise capital — once a major source of earnings for Goldman — have been eclipsed, these people said.

But it gets better;

With the traders ascendant, Goldman’s bankers are being urged to generate bigger profits. In what former partners called a significant shift, Goldman now uses “profiles” to track how much money its bankers are bringing in.

But even Goldman concedes it is changing with the times. “This business is all about serving clients, and if you don’t evolve, you die,” said Lucas van Praag, a Goldman spokesman.

In the end one can see the caviar finally been removed from the dining room table and being replaced by lots of pepperoni and if that helps the boys at Goldman Sachs stay fat and rich keep expecting them to eat hordes of eat it too.

As Goldman Thrives, Some Say an Ethos Has Faded – NY Times