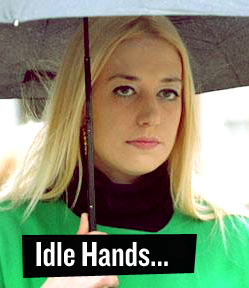 A Royal College of Music graduate who played at the wedding of Prince Charles and the Duchess of Cornwall has been convicted of handling stolen goods while battling a drug addiction, reports the Times.

Jemima Phillips, 28, a former royal harpist (what a job title!) confessed that she was hooked on heroin while she held her royal appointment, playing at private functions where she “would be sat a few feet away from the Prince”. Spinning a sob-story for the jury, she spoke of abortions, bullying at school, abusive relationships and a dysfunctional home life.

She told the court she met her co-defendant and ex-boyfriend, William Davies, who was found guilty on four counts of burglary, “on a street corner in Gloucester, when he gave her a bag of heroin,” the Times goes on. “He was romantic and charming,” she said. Well, if a bag of brown on a street corner doesn’t shout romance I’d like to know what does.

“He went round telling his friends and the dealers about me,” she said. “I was getting comments from these people like ‘Say hello to Prince Charles for me.’ I was worried about these people selling me story to the press, about my drug addiction.”

Rather than see the red flags and attempt to extricate herself from the situation, Phillips opted instead to look after the stolen goods for her charming boyfriend, and, unsurprisingly, ended up in the papers anyway.

Happily for the musician, who says she has been clean for two and a half months, she is still reportedly earning up to £2,750 a month “at concerts, recitals and as a teacher at local schools.” After all, why pass over a perfectly good harp teacher over a silly little thing like a heroin addiction and a criminal conviction?