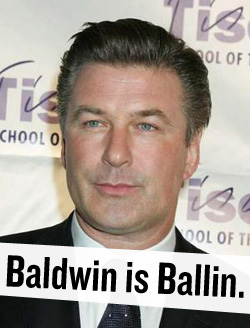 It seem as though celebrities have been bitten by the Christmas bug, because their generosity with their wealth these days is parallel to Santa Claus. ‘Tis going to be a jolly good Christmas after all! (Alas, still not so great for British Airway ticketholders). Alec Baldwin graduated in 1994 from New York University’s Tisch School of the Arts. He compliments, “The support I got from Tisch made it possible for me to become an actor and to have a career in this business. It’s important to give back to those institutions that give us such opportunities, and I encourage anyone to look into supporting their alma mater.” Apparently the fond memories of his college days is still ripe in his mind — he chose to give back to the hand that fed him and groomed him as an actor — he donated $1 million to his alma mater.

In a press release by Tisch, the Alec Baldwin Drama Scholarship Fund will be available starting in 2010. In order to be considered as a recipient, students will have to be in good academic standing and demonstrate financial need. The scholarship with provide tuition support to those who demonstrate “work ethic, development of leadership skills, willingness to collaborate, the ability to tolerate risk, and the capacity to work with constructive criticism.” In addition, special consideration will be given to students who come from families burdened by economical hardship  or the first in their families to attend a college or university.

Another famous entity also donated over $13,000 to the soldiers stationed at the main Army National Reserve in Indiana, who are training to be dispatched to Afghanistan in January 2010. Stephen King, the author responsible for his celebrated spine-chilling horror novels, has caused our spines to tingle again — but this time, in a heartwarming way. His financial contribution will bestow these soldiers (and the 150 respective families) with the best Christmas present of all — the chance to spend Christmas Day together. King has given the families the chance to create more memories with them before sending them to war right after the New Year. He also has given these men the invaluable opportunity to take a short relief from the stress and duties of war; Even for a short time, they will be able to go back home, and be able to be someone’s son, father, husband, and friend.