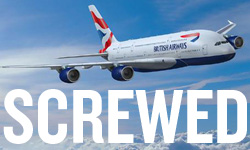 Spending your Christmas jilted is a British thing.

If you had a flight booked this year with British Airways, it looks like you’ll be spending the holidays miles away from loved ones. This disruption in flight service is like a direct sequel to the disruption 2 years ago at Heathrow Airport, when a fog caused delays and cancellations in flights, leaving passengers marooned at the airport on Christmas. Is it just me, or does it sound like Britain’s airport and airplanes has a Christmas Grinch just begging to be noticed?

The staff of British Airways has come to the decision that their first walkout in 12 years should perfectly coincide with Christmas. Their strike will last from December 22nd until January 2nd. Apparently, the decision to strike came ” with a heavy heart” according to union leaders. In the end, the “heavy hearts” weren’t heavy enough because 92.4% of the members chose to take action on the scheduled time span due to “escalated pay and working conditions.” The assistant general secretary of Leaders of Unite Len McCluskey stated, “You don’t often get ballot results like this unless there is a deep-rooted sense of anxiety, concern, and anger. The problem with intransigent management is that you can push people so far, but eventually workers will say that enough is enough. We would like passengers to be angry with the company…The company has consistently refused to accept our proposals and wants more from cabin crew than we believe is necessary.”

Frances Tuke, of travel organization Abta, gave advice to stranded travelers, “At this stage, our advice would be to sit tight and see what happens in the next 24 hours. It looks as if both sides are continuing to negotiate and we’re still hoping it might be called off.” Yet, with the holiday rush it’s almost safe to say that it’d be impossible to find other arrangements in time. Even more bad news for those who didn’t buy ticket insurance for industrial action (something that we’re sure you rushed to buy) you will not be compensated if you book new tickets. For most the real options include either praying on a Christmas miracle, paying up to twice as much to ensure that their travel plans are intact or just wallowing in disgust in their homes.

Of course not particularly impressed with the union’s stated desire to strike British Airways issued the following hollow statement;

“British Airways is extremely disappointed that Unite is planning massive disruption for hundreds of thousands of our customers over the Christmas/New Year holiday period. A 12-day strike would be completely unjustified and a huge over-reaction to the modest changes we have announced for cabin crew which are intended to help us recover from record financial losses. Unite’s cynical decision betrays a total lack of concern for our customers, our business, and other employees within British Airways.”

The British Airlines Stewards and Stewardesses Association in turn then declared, “We are conscious of the disruption this will cause and we genuinely don’t want to inconvenience the public, but we feel we have no option.” Assuming using travelers as bait is never an inconvenience….

The moral of the story- these two groups really do deserve each other, it’s just a shame that public flogging no longer exists.