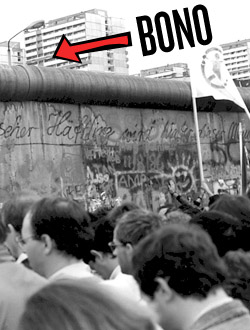 U2 is a politically conscious band. This has been their thing for a while now and this is the thing that really puts the ironic spin on an otherwise ordinarily ridiculous situation.  In Berlin, Germany, to celebrate the 20th anniversary of the fall of the Berlin wall, U2 threw a “free“ concert inside a six-foot-high partition which just makes a person’s brain melt if they try to apply logic to the idea. It also makes you wonder just how much of the band’s politics are anything more than a publicity stunt. Not that that thought had ever crossed our cynical minds before, obviously.

The barrier— a metal fence draped with a white tarpaulin— was designed to keep out the thousands who had not been lucky enough to receive one of the 10,000 free tickets made available, but who had shown up in the hopes of catching a glimpse of the action from afar. This optimism, of course, went completely in the face of the sense of unification, shared interests and openness the event was celebrating.

It seems that MTV (the show’s organizers) and the local promoters and police who collaborated to arrange the night’s event are the only ones who couldn’t see the (delicious) tasteless irony. Even the locals, not renowned for their sense of humor, spotted what seems to have gone over the heads of the powers that be. Wolfi, the leading DJ of a local radio station, was quoted as saying “Is this a sick joke? A band whose leader, Bono, campaigns for world peace and freedom, puts on a concert to commemorate the fall of one of the most monstrous barriers in history, and they erect a wall to stop fans from taking part?”

And if Wolfi can spot a bad joke where MTV and Bono can’t, you have to wonder what the latter were thinking.