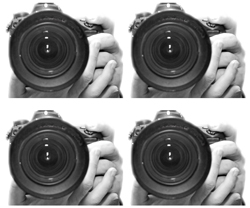 When the price of your favorite celestial misfit is plummeting.

It looks like it may be time for America to collectively start weeping in their collective napkins with the release of the sobering news that the market value of photos depicting Brangelina, Lilo, Megan Fox and other photogenic celebrities has plummeted 31 % this year. What does this mean? As we see it, a number of things. It could mean that media publications around the globe are hemorrhaging so much money that the act of coughing up 43 million dollars to take a picture of Lilo sniffing or puking is straining their budget.  Or it could be the simple assumption that people simply don’t care as much as they used to about their favorite celebrities. Of course, our bet is the former, because if we know one thing about living in America, it is that Americans will always love their celebrities. In the absence of religious deities, America will always be intrigued by the (perceived) fabulous lifestyles of the illustrious.

Of course, with the economy in shambles (except for that sector called wall street, which perversely seems to make more money when most of America is on its knees) we have to wonder if, in our collective sobering attempts to stay afloat, the pathetic (yet always photogenic) antics of privileged individuals are beginning to wear on us. As ludicrous as this idea may be, it goes a long way in explaining why the price of paparazzi photos are no longer holding traction. There is also the idea of supply and demand, with more 14 year olds working out how to take photos and more unknowns suddenly telling you that they too are worthy and fabulous, the idea of celebrity is beginning to wane.

As, long as there are images, incredible journeys and scandal, a picture will always will be invaluable. It’s just deciding on the freak value that the dilemma begins…