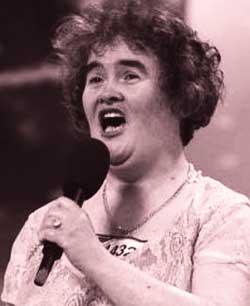 Susan Boyle, who became a star overnight with her bushy eyebrows, frumpy posture, and a beautiful voice, has broken a new record on Amazon.com. Her debut album, aptly named, “I Dreamed A Dream” has “far surpassed” the numbers people had guesstimated.

Honestly, I’m surprised. I thought her 15 minutes were up but it looks like she has got 5 left. No doubt she has a good strong voice, but were we captivated by her voice only? Wasn’t it due to the fact that when we caught our first glimpse of her it lowered the bar to the lowest standard known to mankind, which made her performance seem like an angel had come down from the heavens and blessed our ears? If a normal-looking woman had come onstage and sang with the same voice, would it have had the same effect on us? (Although, if a gorgeous woman with huge knockers came out, the judges would have scrambled over their chairs and called her heaven-sent, while we sat in our sofas cursing the Gods for being unfair). Yes, she had a lovely voice, but were we so comfortable to give her praise because of her ugliness? Did we think deep down, “Wow, I’m hotter than her, so I guess I can praise her voice?”

We, as an audience, have become so jaded and our minds so cluttered that we only recognize and acknowledge talent when it comes with a side of ugliness to taunt. Now that she got a makeover, had a nervous breakdown, has a number one CD, what’s next on the Hollywood path? And as her eyebrows become thinned out, her hair becomes hairspray-ed down; will the fact that she now looks like any another Scottish woman be the overriding factor that will destroy her career and erase her from our memories