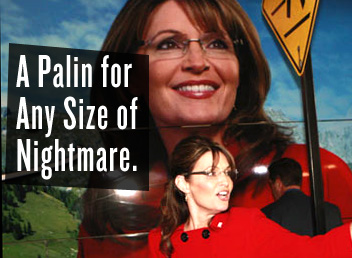 You would think that Sarah Palin getting the political beating of her lifetime last November never happened if you were to take a glimpse of the very long lines of people queuing patiently to meet their favorite lady pant-suit. From this morning’s UK’s Guardian comes a very scary story of how an uneducated zealot pushing myths, book deals, bikini tops, and right wing rhetoric hate and love could still install so much attention, adulation, and book sales.
Making her way in a shiny bus with her image emblazoned on it- Sarah Palin is on a mission to endear Americans and get very rich off their back. As American a trick as we can think of.
States the Guardian:

In launching one of the most remarkable book tours in American political and publishing history, Palin is becoming a dizzying mix of celebrity and politician. Her folksy blend of right-wing rhetoric, uber-patriotism and winning smile is as heady a brew as ever for those millions – and they do number in the millions – of Americans for whom she is a hero.

Hero? Well why not. We haven’t figured out what heroic stance she has taken— We don’t even understand what definition of hero the world is operating on. Continues the Guardian, who themselves (probably because they are English and are themselves not used to this kind of bold brouhaha) are incredulous at the weird ascent of Sarah Palin:

For them Palin is not a liberal media joke or a stumbling backwoods politician who fluffed her chance at the big time. She is a truth-teller and their last best hope against the encroaching horrors of socialism. She is St. Sarah of American Capitalism.

Nothing else could explain the utter devotion and enthusiasm of the thousands of people (almost all of them white) who showed up at the first stop of Palin’s 14-state, three-week tour of the American heartland.

They queued for 24 hours just to be first in line, bringing tents and camp chairs to a gigantic mall on Grand Rapids’ outskirts.

Interesting, the Guardian can barely keep it’s sanity cap on. But then again who said the world was sane. Continues the report-

A CNN television truck pulled up, triggering a round of loud boos from a crowd that almost certainly trended towards watching Fox.

But that was the only angry emotion at the event. The atmosphere was more of a rightwing carnival. People wore Palin hats, Palin T-shirts and Palin Power stickers. They read avidly from her book and often broke out into opposing chants of “Sarah! Sarah!” as if at a good-natured football game.

In the end, the world will continue spinning. Only difference may be how fast Alaska spins with it. Well, that and where Sarah Palin vaults her ocean of money.