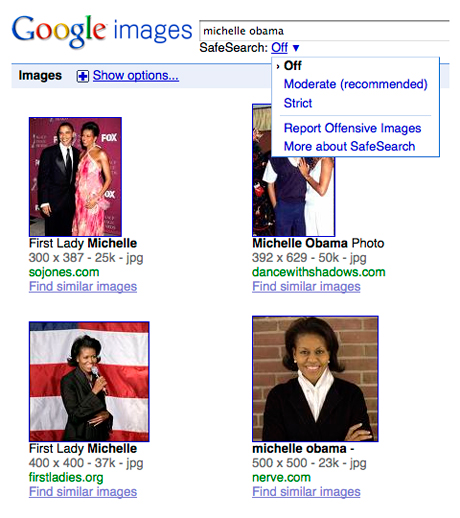 The search engine Google has found itself in an extremely delicate situation this week surrounding an offensive image of Michelle Obama, and has taken a very confident and somewhat unexpected decision in how it has chosen to deal with it.
The image in question (which has now been removed at source) shows an offensively photoshopped picture of the ordinarily lovely face of the first lady, and was until yesterday the top hit returned in a Google Image search for “Michelle Obama.” This caused much outrage and raised questions of how Google could have allowed this to happen. The search engine had responded by placing a small notice in what is normally used as advertising space, so that it appeared directly above the image. Under the title “Offensive Search Results” was a caption reading “Sometimes our search results can be offensive. We agree.” There was a link to an “explanation of our search results”, which stated that search results and the order in which they appear are determined by complex computer algorithms rather than the “beliefs and preferences of those who work at Google … [which] do not determine or impact our search results.” They made it very clear that they would not be removing the image from search result listings.
There is no doubt that the image was offensive – nobody is questioning that for a moment – but an awful lot of seemingly educated people were clamoring yesterday for its removal from search results, without apparently realizing that what they were demanding constituted online censorship. Google results are filtered in order to comply with the law in certain countries, including the US. In China, the law is significantly more restrictive over what the search engine can and cannot include in its results, but those are restrictions imposed by China’s own government by law, not by Google and its executives. That is a wholly different issue which justifies a whole other article. The image of Michelle Obama, as tasteless as it was, was not illegal, and for Google to remove it from their listings (either because they themselves deemed it to be inappropriate and had chosen to take such action, or because they felt forced to do so in order to protect themselves from the public backlash) would have been the beginning of a very slippery slope. We, the public, and the consumers of Google’s service, would no longer be able to rely on the impartiality of the search engine. When a company effectively stands between the public and our access to information, as Google does, that company has a responsibility, and we need to know that we are getting the whole story, not that there is someone sitting in an office removing potentially inflammatory items in order to cover their own back.
It was quite clearly in Google’s immediate interests to remove the item from their listings. The strength of public feeling against their refusal to do so has been intense and life would be a lot easier for them now had they chosen to submit to the pressure rather than involving themselves in an ethical debate. However, had they done so, they would also have set a very uncomfortable precedent and left themselves in the position of having to do the same with every article deemed offensive to anyone, anywhere. This is not so much about freedom of expression as it is about our right to access information. To remove the public’s access to such an image is potentially very harmful, as it is effectively the destruction (or, at best, the obscuring) of historical evidence. If a sponsored corporation is making decisions about what should be accessible to those wishing to look for it then their credibility is completely undermined and our freedom of access to that information goes with it. By proxy, this fuels the ignorance that leads to the creation of images such as these.
We are not talking about one pathetically ignorant and offensive image here, which frankly has been getting far more attention than it deserves, but rather about the impartiality of the information that is available to us. We all have the right to decide not to view something which we find offensive, and we can all choose not to click on that link, but having information removed before we can choose whether or not we wish to access takes things to a very different and very worrying level. Personally I am relieved that Google had the courage to pass up the quick fix solution in order to take a stance that will serve all of our interests in the longer term.
SHARE
Facebook
Twitter