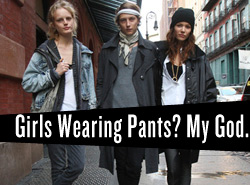 Reinventing fashion for the recession.

It seems the NY Times has come across a very interesting idea/trend of how to try and sell fashion to the world again. Simply, it involves convincing boys and girls that it’s okay, sexy, and even edgy to start wearing each other’s clothes. The payoff? More love from the opposite sex, more money for the fashion designers, and more post-coital confusion amongst 23 year olds who are already unsure how they ended up in New York City. So glamorous yet so unemployable (oh well, best to look a hot mess anyway).

Reports the Times (who we are suppose to believe):

“There is a whole transition of men getting into women’s wear. It used to be that the people who did it were just the edgier ones. Now it’s much more common.”

Mmh? So common that this author is going to go shopping for the cutest micro dress (in fuschia thanks) that he can possibly find. But please don’t confuse me for a fag, because I’d rather be confused for just being, well, common.

Continues the NY Times reporter who must have been smoking copious amounts of opium when they wrote this piece:

At one time, such artfully calibrated ambiguity might have been the expression of a renegade mind. Today it seems scarcely more subversive than wearing black, just the latest countercultural gesture to be tugged into the mainstream. The look is androgynous, for sure — but with a difference.

We have a surprise for you sunshine: it is still for renegade times. We bet the NY Times all the money in yesterday’s jeans that the cross dressing deal will never take off outside of the West Village. Why? Because every other ‘edgy’ trend created by the fashion world never takes off in suburbia (unless it comes from suburbia- like white sneakers). Why? Because the kids will get the shit beaten out of them if they attempt such ludicrous behavior. Therefore, they all come to NYC and other freak friendly towns in the world that will look the other way when you walk past the crowd like a tragic fashion mistake on opium speed balls. That is, until the day their assailants, too, decide it’s cool and try in vain to dress like freaks too.

Then there’s this quote:

What Dr. Ehrensaft has dubbed “gender fluidity” remains in her view a form of rebellion. It suggests, she said, that “younger people no longer accept the standard boxes. They won’t be bound by boys having to wear this or girls wearing that. I think there is a peer culture in which that kind of gender blurring is not only acceptable but cool.”

Our view:  Halloween came and went and as much as we love the idea of bending lines, blurring gender and other smudging, pseudo-artistic ideas, we would prefer it if the New York Times took a long look at the outside world. The only peer pressure NYT feels is the drive for media companies to get their audiences off, never mind the confusion.

It’s All a Blur to Them