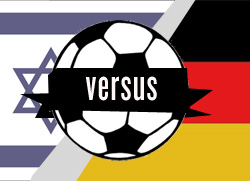 When politics gets in the way of good will.

Here’s an interesting (distressing) situation out of Israel (you know, that fun place where the Palestians and Jews attack each other like madmen):

In anticipation of the completion of a friendly soccer game at the almost completed soccer stadium in Rammaluh, the Civil Administration, an arm of the Defense Ministry, has ordered that the work be halted and is threatening demolition.

Why may you ask?

Well according to haaretz.com (an Israeli blog) this is why:
The document claims that work on the stadium’s stands is being carried out “without a license,” and contains other standard admonitions: “You were given an opportunity to appear before the inspection subcommittee to state your case. The subcommittee has concluded that the aforementioned work was carried out without proper permission … You are hereby obligated, in accordance with section …. of the 1966 City, Village and Buildings Planning Law, to cease activity upon and use of said land, and to raze the building … and to restore the location to its previous state within 7 days … If you do not act as required, all legal means will be taken against you, including demolition of the structure and any means required to restore the situation to its prior state, at your expense.”

At stake is the goodwill gestures of the German government and FIFA who are quite livid now, after so much money and time has been spent building the stadium.

“This could become a major diplomatic issue between Germany and Israel. Just imagine: A German-financed project being torn down. It would definitely be a political scandal.”

On a practical level, the Ministry for Civil Administration (a lovely name for an opaque organization) is disputing that it was correctly notified and no concrete plans and land had actually been set aside.

It emerges that some of the land in question, which the municipality designated for a school and other public buildings in the early 1970s, had the misfortune to later be defined as being in Area C (see box). Amid the 11,000 dunams (2,750 acres) that fall within the city’s bounds, there are several such Area C “blotches” – for the most part, in areas close to where the settlements of Psagot and Beit El, as well as IDF and Civil Administration bases, were built, on the lands of Al-Bireh and Ramallah. The headquarters of Jawal (the Palestinian cell-phone company) is located in Area C, as is the house of Dr. Samih Al-Abed, who heads the Palestinian team at the territory and border negotiation committee. Even part of the residence of PA President Mahmoud Abbas is in Area C.

What does this all mean? Well we’ll let you figure that out but it is interesting to note that the Israeli government has been stepping up its efforts to displace Palestian residents in nearby communities so Israeli residents can move in instead. bureaucracy

There isn’t a moral to this story, as long as opaque power structures exist, the goal posts can always be moved to suit political (?) agendas. Pity, it would have been nice to have seen a friendly soccer game been played amongst people who are essentially brethren of the same land.