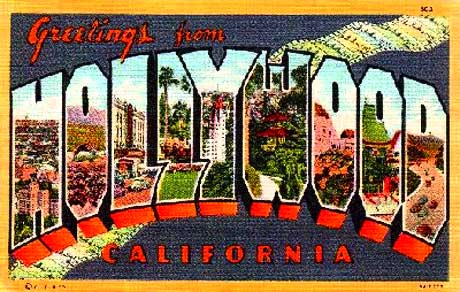 SCV: How much has Hollywood changed with the introduction of reality shows.

Bill: It’s a free for all. Instead of having to shell money for creative content they just have all these ‘managed’ reality shows, where they follow a bunch of crazy people and sell their life story as entertainment.

Jimmy: With what it would cost you to pay to get content for one pilot you can now use the same budget to get 10 reality shows- so what do you think happens to content and quality?

SCV: But if it’s what the audiences want?

Bill: How many reality shows can you have on housewives? You already have it in NY, NJ, Orange County, what’s next ? – Baghdad?

SCV: If it sells right? If the public want it?

Jimmy: The public wants what you feed it. Of course the public always has the power to make what it wants too with the freedom of You Tube and believe me if it gets traction, becomes viral Hollywood will come looking for you too.

Bill: Essentially Hollywood has dumbed down the tastes of the world. All those tabloids that talk over and over about the same Hollywood people and movies, who do you think owns those? The same multi nationals that own the movie studios, this is serious- it’s about money, it’s nothing personal.

SCV: So how does a movie house decide in the end which movie to make?

Jimmy: Well, the houses have gotten good at figuring things out. It used to be in the past if a film made a 100 thousand in the US you could pretty much bank it could make 400 K world wide. After a while the houses started saying to themselves, ‘wait a sec, if we’re making most of our money with our o/s audiences why don’t we just make films thay they’ll want to see, and cause no one really cares about translations except fake tits and blonde hair that’s what you’re getting these days.

Bill: Actually I’ve noticed since I’ve been in NY there aren’t as many people with fake everything as much as there are in LA.

SCV: Have you been to Long Island yet? You might change your mind then.

I’m curious with the advent of technology how is Hollywood changing?

Bill: Ultimately I think technology will inspire a new creativity.

Jimmy: Yeah, you’re already seeing it- with major motion films being shot in 3d to keep audiences at the cinema, live events, NBA being featured in film, the making of you tube type indies into viral and Hollywood picking up distribution.

Jimmy: At the end of the day content is king, dumbed down or not and the multi nationals who distribute this stuff no that. Well they also know you’re not going to watch ads anymore either so what I’ve been seeing as my role as a screenwriter is for companies like Heineken reaching out to me and asking me to write a character who comes from Heineken world and to weave him in there.

SCV: But isn’t this compromising the integrity of the film?

Jimmy: They don’t care, it’s all about getting product placement, and since technology means you can skip the ad parts you now have to get the movie houses to write them into the story line.

SCV: What has this done to the idea of making film as an art form?

Jimmy: It’s all for sale. It’s come down to formulas and negotiations between this guy and that guy, who cares about artistic content?

SCV: So why even write films?

Jimmy: Look the 3- 10 million film is dead, it’s full of formulas and that’s money you can’t afford to lose anymore trying to be creative but say you can make a film for around a million well ironically you  have more freedom as a film maker to be more creative.

SCV: Haven’t you protested as a director when these multi nationals and production houses have started barging in on you?

Jimmy: Look in the end it’s people like Walmart that call the shots. Cause they distribute to the largest customer base you go to pay attention but I think for some projects you really believe in you can still get some leeway.

SCV: Tell me about the Motion Pictures Association of America.

Jimmy: The funny thing is no one knows who is actually on the board of the MPAA. It’s all top secret , it’s nuts. They once had these cameras set up for a meeting to see if they could figure out who was coming and going out of the meetings and they still couldn’t figure it out.

Bill: It’s a bunch of right wing Christians trying to tell America how to think and be.

SCV: So what do you say to someone who still wants to pursue a career in Hollywood?

Jimmy: Do it yourself. Don’t rely on Hollywood, make them come to you.

Bill: Make your own films, that’s the beauty of the web, then make it viral and you’ll see Hollywood will come to you.

Jimmy: The other thing is to get in the face of all these film schools, people like Robert Redford at Sundance, make them know you exist, get into these people’s workshops and apply to as many film festivals-

SCV: And for an actor?

Bill: The same, unless you are the daughter of some Hollywood star or a 9 year old former Disey star it’s tough cookies, it’s better to align yourself with productions that people are making devoid of Hollywood and if they’re good and get a mass audience which is the beauty of the internet then Hollywood will always be interested.