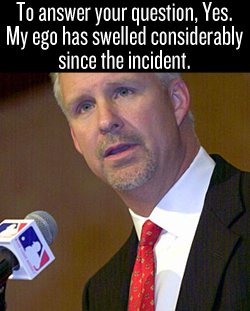 Psychos, sportscasters and their wives.

Welcome to the life of Steve Phillips, America’s sunny face on ESPN, and the current nightmare of an ensemble that includes his wife, Marni, his jilted 22 year old lover and the network that hires (fires) him.

Unable to make sense of the mess he has left behind, (the predatory phone calls, the stalking) he has now asked for  an immediate leave of absence (a cute way of saying that the network wants him out) while he gets a grip on his situation.

What exactly his situation is anyone’s guess- a cursory glance has us guessing it’s a cross between ‘Fatal Attraction,’ and ‘Nightmare on Elm Street,’ but scarier and with a less photogenic ensemble. That said the current cast includes jilted production assistants who taunt wives about their supposed loveless marriages, sexcapades, and the insistent phone calls saying they both can’t have the man that inspired this wonderful drama- Steve Phillips.

Marni for her part has filed for divorce (that’s the part where you go and get the popcorn because you know it’s going to get even juicier any minute now…) on one level because she’s probably had enough of Steve’s affairs, but we think it was more so because of the 22 year old freak factor-

Hundley’s desperate actions — including accidentally smashing her car into a stone column while speeding away from the Phillips’ home after leaving the letter — terrified the family, according to the Wilton, Conn., police report.

“I have extreme concerns about the health and safety of my kids and myself,” Steve Phillips said in a police statement, adding that the woman became “obsessive and delusional” after he dumped her.

The moral of the story is that sometimes there’s more drama off the field than there is on, but as long as it’s there, the popcorn will keep a coming.

9 Devices a Student Cannot Live Without