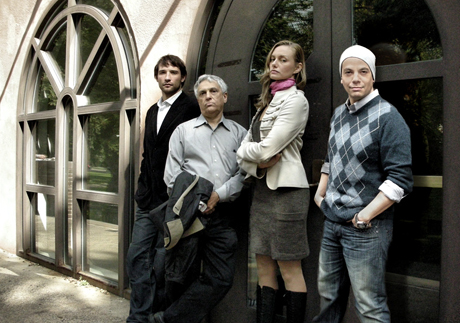 In a day and age where we always complain about reality TV shows and how dumb some of the reality stars are, are we even aware that it is our own faults that these people reach the level of success and fame that we all secretly vie for? By constantly feeding the machine that we know as the media with our acknowledgments — whether it be negative or positive — we are fueling this insipid form of entertainment. With our sense of reality, imagination, and morality melting away, what a perfect time it is for a play to take place in order to take a deeper look into our unwilling obsession with reality TV.

“The Corridor” a Slovenian play translated into English, is being put on by the Wayward Pen foundation in hopes of raising awareness of Slovenian art and culture into America. I had the amazing opportunity to sit down with producer Larissa Drekonja and director Martin Kushner, to discuss the play in depth and to my delight, divulge deeper into the psyche of the human mind.

Larissa Drekonja: I created the Wayward Pen foundation with Klemen Novak and Adam K Fujita because we were looking for an organization to help us put an event up — a non-profit one so it would be easier to raise capital. Since it was a Slovenian play, I couldn’t get any other organization from Eastern Europe to really cover us, so I looked at organizations just in general and what it takes to set one up, and we decided to fund it and create an organization for artists from Slovenia. We stretched it out to to cover all of Europe, so that the artist who is working with theater or fine arts or music, and is of our caliber, could actually have access and we could provide help for them. Most of the organizations work with either the best ones or there’s a lot of bureaucracy with it, and we just decided to do it as artists -just by living it, like “this is what we need, let’s do it” because if we’re going to wait for bureaucracy to help us we’re never going to get it.

Larissa Drekonja: It’s a Slovenian play, it’s by Matjae Zupancic, one of our best contemporary writers. He deals mostly with subjects that really relate to any culture, well, not any culture, but in the sense of modern culture like: the western and democratic culture, obviously, because Slovenia went from socialism to democracy. He’s kind of a pioneer of a modern and experimental type of theater. That’s why we chose his play: it deals with a medium, reality TV, that could relate to the American audience, as well as Slovenian, English, French, or really any part of the world that is exposed to such mediums and are dealing with the same issues.

Scallywag: For those of us who are unfamiliar with the play, can you tell us a little bit about it?

Larissa Drekonja: This play deals with reality TV, and it sort of exposes the reality of such entertainment. It exposes its vapidity, it exposes what it actuality is. It takes place in something called “the corridor,” which is a part of the studio where the participants can go and be themselves. They can escape from microphones and cameras and that’s where you can see the reality of how they’re really feeling about being part of — I want to call it — the machine. And what it really takes for the producers to call it reality in the end, because it’s not REAL. When you go on a TV show to win, a lot of it is put up to be an artificial environment that exposes artificial behavior and that translates into artificial morals — which is what the viewers get.

The plot of the play is seven participants in the corridor of a reality show and their meetings there, which sort of are an indicator of how useless — well it’s not useless — just what kind of quality this kind of entertainment it is — which is very poor.

Scallywag: How did you get the funding for the play and acquire the Box as a space to put on the play?

Larissa Drekonja: We launched the Wayward Pen on June 9, 2009 and we had an event at Cibeta restaurant. We had some Slovenian artists give us/donate some paintings that we could show and we also did a few monologues from the play to introduce it. That was our first benefit, in a sense, to support our cause and to show what we’re trying to do because I do think the play in particular shows the American audience a type of art that exposes a new wave of thinking; sort of like the young people’s, almost like I want to say, rebellion against the boxes that we’ve been put into. I think that’s why people really like the play: it’s not just a love story, it deals with a problem that affects young people. I find that older people sort of dismiss it because they don’t take it seriously, and they think that young people don’t take it seriously too, but I don’t think so! I think young people take reality TV very seriously, and I think there’s something wrong with that!