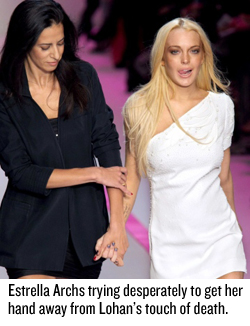 Lilo humiliates Ungaro and the designer is left wringing its head in shame.

Don’t act as if you didn’t see this coming but Lilo (who is famous at this stage in her life for being America’s highest paid public nuisance and professional media whore) has hit an all time high (low) by failing miserably in her debut fashion collection as Ungaro’s (cough, vomit, fart) creative director. According to Women’s Wear Daily, who were present at the latest Lilo fiasco, the collection was “an embarrassment.” (at this stage of the game could the writing be any bolder?)

Lilo who on some perverse level has become America’s de facto anti American hero and is much loved for her boorish behavior, or at the very least admired for serving as the collective muse of a country completely disillusioned with itself and its state of affairs, has somehow entered new terrain with her bold behavior and ambitions.

To actively point and single her out is to ignore the cynical attempts by the media at large and various entities who are willing to ride this girl’s huge popularity for the sake of commercial gain and complicity. Sooner or later, the poor girl is going to find herself in a funny farm and/or with a one way ticket to rehab once the powers that be decide to dump the luscious but well-meaning ditz. At this rate the craziness and the general banality surrounding every move of this girl’s life have to give way and we just hope when corporate America really spits her out that she has a safe haven in which to land, although our gut feeling is that haven is called ‘self annihiliation.’

Going forward we are going to start a petition for Lindsay to save herself from herself. In the meantime we’ll spend the day reading about this little girl’s newest reign of embarrassment before, like her, puking violently in the bathroom.

The moral of the story: there is only so much that a 23 year old girl can do before the monster that feeds her chews her head off. In any event, the chewing off of the head promises to be a tele-genic affair…