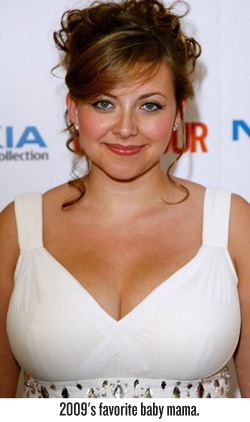 I may just not be very tuned into this sort of thing, possibly because I don’t read celebrity magazines and so don’t know the ins and outs of these women’s lives, but reading the shortlist for the 2009 Celebrity Mum of the Year, I did struggle to figure out what some of the finalists had done to make their way into the final fifteen other than simply meeting the criteria of being both ‘celebrity’ and ‘mum’. I mean, Heather Mills, really?

Some of them are more obvious candidates. I would say that Melanie Brown (aka Scary Spice) has been through the ringer a fair bit with that utter waste of space Eddie Murphy. My personal feelings towards men who deny their children are strong, to put it mildly, and I do identify with the struggle Mel has encountered, and from which she has managed emerge with dignity in tact. Plus, she was always my favourite Spice Girl. In fact, the list is somewhat heavy on former Spice Girls. It’s not quite clear why Sporty Spice was excluded – I can’t imagine what the others have achieved in their parenting careers that she hasn’t. Perhaps there was some sort of Spice conspiracy against her.

I suppose that apart from giving her daughter a truly ridiculous name, which seems to be a common symptom of being a celebrity parent, Katie Price has also done a commendable job of parenting. She’s not always had an easy time of it and she has faced a lot of criticism, but compared to some of the odd choices on this year’s shortlist, I would say that her place in the final fifteen is justified (although I’m not sure that her very public slagging match with the father of her two younger children, Peter André, would score her many points in the parenting leagues).

I withhold judgement on Kate Moss as I really can’t make out whether she has pulled her parenting self together or whether she is just as loopy as ever. Mrs Beckham I personally just find irritating, and I’m not sure what she has done to deserve her place, other than succeed in becoming ridiculously rich on the strength of absolutely zero talent in any field. Then I suppose in a roundabout way that does qualify her as a good mother, because she has secured a childhood for her boys that would exceed most kids’ wildest dreams. Tough call.

I have a bit of a soft spot for Charlotte Church. I think it’s probably just a combination of the smile and the accent (and her exceptional taste in girls’ names, of course!) but I reckon she would be quite a lovely mother to have. She sort of seems normal, more than any of the others do at least.

I suppose what all these women do have in common is that they manage to do what we mothers all aspire to, which is to juggle motherhood with personal and professional success, and though we may poke fun at some of them we can’t deny that they have excelled in one of the more basic requirements of good parenting which is to provide for their children, and they have done it whilst looking unfailingly (well, almost – you know who you are Ms Price) stylish and well-groomed. That said, I don’t think it would be overly cynical to suggest that this particular accolade is awarded on the strength of career success achieved alongside being a mother, rather than on the strength of their achievements as mothers who are also, by sheer coincidence, celebrities.