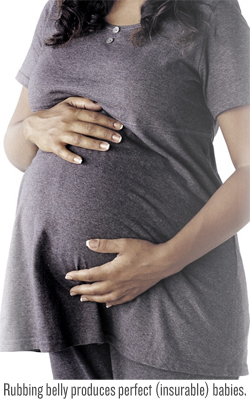 Paradoxes that you can never solve.

Being sick in America ensures that you will never be offered health insurance in America. Why-? For the simple reason that you are sick and you’re likely to cost some insurance company money (and we all know insurance companies are not in the business of giving money away but collecting it every which way). In the mean time, you get to stay sick or cough up the upfront payments, assuming you have the bags of money you normally need to save your life.

That said, let’s go to the latest absurd “you’re unhealthy and in need of help but we’re not interested in helping you get healthy” fun game.

Aislin Gates is a 2 year old infant unable to attain healthcare because she’s too thin. And being too thin is never a good thing because the implicit threat that you may just roll over dead or sick one day. An inconvenience most insurance companies don’t have time to deal with.

Sending a letter to her family – the people over at United Healthcare Golden Rule, had this to say-

“we are unable to provide coverage for Aislin because her height and weight do not meet our company standards.”

In another part of the country last week another infant Alex Lange was denied healthcare because he was considerd overweight (the child was later allowed to join).

In the meantime, Aislin Gates (like 50 million other Americans) remains uninsured, but really, what did you expect in a Loony Tunes environment called “I can change the goal posts whenever you kick the ball.”

America is a great place to live if you aren’t broke or sick.