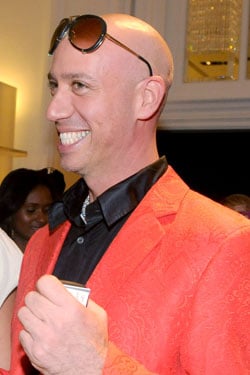 When you get slapped in the face it can sometimes really hurts.

Diva, fag, gay, style consultant- Robert Verdi whatever is vexed these days that his persona and lineage as gay icon and has been is being over looked. Quoted by NY Magazine as been distraught but full of contempt for the upstarts at Fashion Week we wonder if this is as really as bad news as Verdi hints it is.

To be gay, fag, diva and style guru and not be asked to participate even as spectator can we be sure be tough business to the easily bruised ego and vanity box called Robert Verdi.

“I’m really excited to see Jason Wu, but apparently they can’t seat me even though I put his clothes on Eva Longoria long before Michelle Obama wore them,”

“He stopped making dolls and started ignoring the gay people.” He went on: “I don’t get a seat at anything. I don’t get invited to Marc Jacobs. I’m not important enough, I’m not fabulous enough.”

So there it is Verdi even by his own admission is not fabulous enough and probably at this very minute binging on 2 donuts in a row as a conceding star that being a fag, gay, diva and whatever stylist doesn’t count for much anymore.

The moral of the story- Verdi is a bitch but we know he’s not taking any of this seriously and we expect to see his ass sitting near us sooner or later but only because he’s gay, fag and diva according to Verdi’s words and plus anyway – Bryant Park wouldn’t be a pretty site if you had a gay, fag cry baby diva complaining and running around with tears running down his face.

Rovert Verdi- you’re making it through this tough period stronger, trust us…