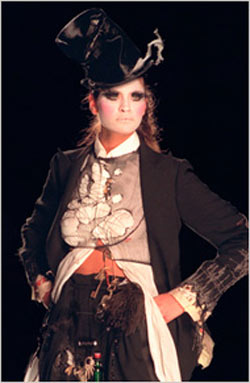 When being homeless isn’t so bad after all.

Here’s an idea for you next time you are grappling with what to wear. According to the NY Times, homeless chic is in. That said, we suggest next  time you are up and about you having a good look at what all the homeless hobos are wearing and  carefully emulating them. Of course the trick is not to actually look as if you were homeless (being homeless is still in most circles considered a faux pas and un desirable experience…) but rather allude to it as if almost in parody style. Ahh! Now you get it…

How then you may wonder can you mimic this chic new style ? Well of course by buying clothes that mimic the homeless ethos but of course here is the catch – at prices homeless people could never afford. Oh? Silly me, why didn’t I think of that?

According to the NY Times-

“It is not intended as a lack of respect for people with no homes and no means,”

“It’s more a kind of admiration for improvisations people come up with in a dreadful circumstance.”

Ok, but that still leaves us with some questions- is there a preferred type of homeless person I should be trying to emulate? The homeless wall st trader, the homeless crack head, or what about the homeless middle American guy/gal who last time we checked are living in hovels and canvas tents. (aha – canvas cape/t-shirt- is that a new trend we should be watching out for?)

In any event it’s kind of sexy and nice that fashionistas are finally sympathizing with the homeless. Let’s just hope they never become homeless themselves. That would be too ironic right?

Aware of the Homeless? Well, You Could Say That