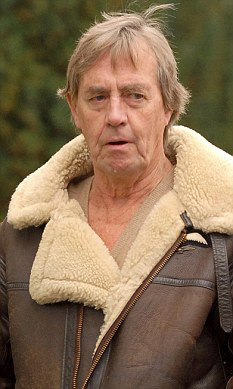 Simon Dee was for all intensive purposes completely talentless, that however didn’t stop this once one hit wonder of English television from carrying on and claiming airs that eventually had him being dropped, despised and at the end looking for a job as a bus driver.

In the end Simon Dee died 40 years later a ‘has been,’ unable to regain his former glory and left to pasture. Lindsay Lohan you have been warned.

Offered to play the part of a dj back in the 60’s he jumped at the chance where he finessed his skills at being a sexual maniac. Adored by many women and coincidentally loathed by men his big break came when he got offered the role to front a talk show for BBC.

Overnight, he had millions of viewers watching his ad hoc programme and Hollywood celebrities queuing to appear on his show. That of course only lasted so long when interviewees started complaining about Dee who was acting up, drunk, high or just plain rude (could this really be Lindsay Lohan’s role model?).

Passed over by BBC he then went to other networks before eventually paid a few pounds to get lost. Where as in the States we are sure Dee would have spent the rest of his life kissing you goodnight every night on TV it seems the English aren’t particularly inclined towards certain behavior. It’s one thing if royalty misbehaves, but another when celebrity misbehave, but then again in America celebrity is royalty.

In the end Dee spend many years living alone, occasionally visited by his children and paradoxically forgotten by many who had once crammed to watch him. From time to time he would ask for numbers of friends, but would be later told they had long since passed away.

For a while Dee after being sacked continued living like a king, getting around by chauffeur and maintaining a personal assistant until eventually he couldn’t afford to. He still liked to think he was famous and important.

In the end Dee died of bone cancer, lived a lonely life but at least held firm onto the belief that one day the world would remember him. Ironically they have, the day he died…

If only Dee was around in 2009 he’d be super famous and laughing all the way to the bank just like Lindsay.

The groovy rise and sad fall of Simon Dee, the real Austin Powers