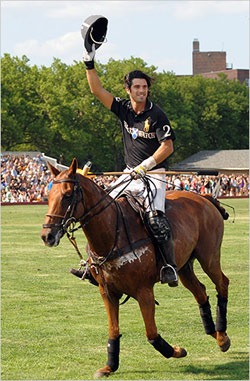 Using pretty boys to turn you into a diehard fan.

In this weekend’s style section of the NYT’s the lads and lasses at the Times try to entreat us with irreverence for a Latin stud who has a ‘romantic square jaw’ and the love and affinity of a certain collective. That collective it should be noted are the high stakes populace that make up the top one percent in society and wealth. Nevertheless the Times attempts to turn this ‘pretty boy,’ into an object of your desire forgetting to mention that most sports are designed for the masses and since Polo was never designed for the masses (no matter how much that $75 Ralph Lauren T- shirt suggest otherwise).

Rambling about his apparent good looks (the currency of choice we understand these days) the Times then goes onto salivate and describe how he comes from pedigree, hangs out with pedigree, and of course even married pedigree (naturally). They then go on to assert that his friends and relations are all celebrities and if it was desired his wife (a photographer) too could also easily get in front of the camera.

A sense of pity and disgust is posed as Nachos had to last week contend with ‘Real Housewifes’ at the VIP tents and to some degree his thunder was stolen (looks aside).

If we could advise Nacho it would be, keep looking good on the field, keep attending to your celebrity friends (in the same way we do) but for heaven’s sake didn’t you know we in the USA don’t care about pretty boy, horses and mallets unless the mallet being used is by a desperate housewife for a photo op.

Where pretty boys fail pretty girls will always take off, but thank God Nacho’s day job is panning out. Nice to see the NYT’s fawning over pretty boys too…