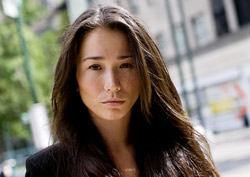 Welcome to the miserable summer of Rosemary Port and that of socialite model Liskula Cohen. The misery pretty much began when Rosemary’s identity was given up by Google to Liskula who pressed to find out who was behind the website ‘skanksin Nyc’ which essentially had Liskula as the starring ho and skank.

Outraged as she may have been the irony is before Cohen went after Google and to the press (NY Post) to cry about her name being dragged through the mud there were only two hits a month coming to the site- that of Rosemkary Port and that of Cohen. Now that Cohen has chased the issue 94 percent of every child and adult above the age of 17 is looking into this ridiculous fiasco.

Of course Port is not very happy because now her name has been drawn through the mud and she is looking with the aid of lawyer Salvatore Strazullo to sue Google to the tune of 15 million dollars for revealing her identity. That plus herself turn to other sleaze newspaper NY Daily (while Cohen swings out of NY Post).

Port has a point in arguing that the constitution has a right to protect the individual’s right to freedom of speech and freedom of opinion. So if one bitch wants to call another bitch a skank or ho they can. Of course the issue for the bitch being called skank or ho is whether that is tasteful or defamatory?

One could probably argue one theoretically could offend the sensibilities of another and to be asked to quell opinion is a harsh request. Nevertheless Port and Cohen now the laughing stock of every child and adult over the age of 17 will perhaps be better served to let bygones be bygones in the future and resist the urge to act like a bitch.

When 2 bitches get together the molehill now becomes a moutain.