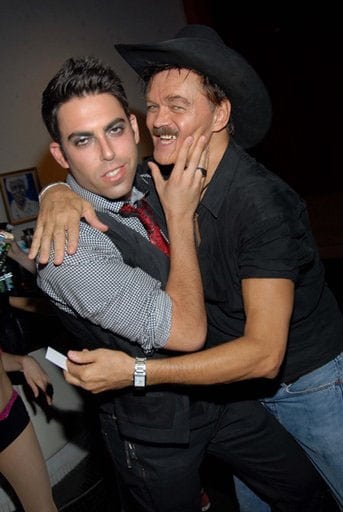 Although I was but a mere distant dream of my parents in the 1960s, I became so aware of Andy Warhol and his generation by the constant chatter of my art school friends and the movie ‘Factory Girl.’ Eagerly I entered the Gershwin Hotel and a huge fixture on the ceiling eerily pointed to the large plush red velvet curtains that separated the hotel lobby from the party inside.

A large poster of Andy Warhol, with camera in hand, peered down onto the party goers as if he was saying, “Welcome to my party, bitches.” This was the after party for the premiere screening of VH1’s Andy Warhol’s “roc/doc” named: “Lords of the Revolution.” A short series that will air on August 10th, it focuses on iconic individuals of the 60’s and 70’s. Sponsored by the Kymara Gallery, VH1, The Gershwin, Blue Elephant Catering and Events, and Chang Beer, it was fittingly called, “Andy Warhol Midsummer Madness Birthday Party” – a celebration of not only the film debut but of Andy Warhol himself and the legacy he left behind.

Scanning the electric crowd consisted of a much older community, possibly people from Warhol’s era. For those who didn’t already have white hair, the rest donned white wigs as a tribute to Warhol. In addition to them, there was a sprinkle of eclectic people. Two beefy gentlemen dressed as ‘Little Bo Peep’ and pranced around enjoying the attention and the camera lenses focused solely upon them. Another man was dressed in a gladiator outfit with a large feathered boa dangling from his horned helmet.

Performances included an art music presentation and the band ‘Whore’s Mascara’ playing Billy Name’s (a photographer, friend, lover, and main archivist in the Warhol period) favorite band and appearances by Warhol’s mystery guest superstars. An intimate setting as opposed to a groping public engagement one almost had the feel that Warhol himself would turn up with Edie Sedgwick draped on his arm, yelling “Surprise!” And even though that’s a preposterous thought, I could still feel his presence all throughout the party –above all through the people there who seemed to be proudly enjoying his nod from VH1 as a beloved and inspirational icon. At least this gives me bragging rights that I came to Andy’s birthday even if I wasn’t around when Andy was around, not that Andy isn’t still around…