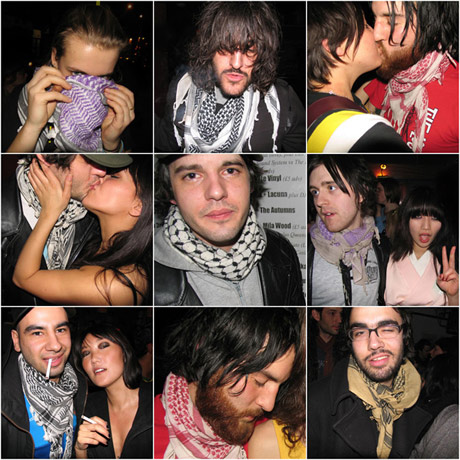 Saturday Night in Williamsburg- the hipster’s are starting to look more like Taliban with their 12 inch beards and track bikes (bikes without brakes.)  There is no stopping the influx of these pirates blindly plowing down Bedford, just hoping there will be no end to the hill, or a school bus driver forgetting to look both ways, mistaking their black American Apparel t-shirt for a trash bag blowing in the Williamsburg wind. Isn’t text messaging while crossing the street hard enough? Yet, while in the face of the rumbling Boar’s Head trucks barreling down the peripherals of Metropolitan we must now also be weary of the back up bassist of the self distributing “we’re going against the grain and releasing our music on cassette tape” band’s knee locking under skinny tight jean suffocation?

If you hit me, I will break your frame.

At 11pm, I enter Graham L-train station en-route to Morgan Avenue.  I descend underground amidst the crowds of wife-beater burnt “Annie” look-a-likes, realizing there is no sunscreen in Williamsburg-just drunken graphic designers discussing “the third film from the director of ‘40 Year Old Virgin’ and ‘Knocked Up”- their spandex stretched across saggy asses.  Going to the gym has gone out of style, but the head- to-toe tattoos will hopefully detract from “Is anyone making art here?”

How could they? A 12-hour-day at Beacon’s Closet, sifting through all those smelly cowboy boots is a full time job.

Has every kid I beat up in science class been recruited for this army of ugliness?

They swipe their Metro Cards over and over, but they have become too bent in their suction cup pockets, and god forbid they owned a purse- that would equate traditional female thought! 20 swipes later, I skip ahead as they retreat to the machine.  8 quarters later they have rejoined me on the tracks only to complain about this summer’s L-Train service.  Imagine what it was like ten years ago-just be glad there is air conditioning. They look at the rats on the tracks and give a look to say, “They’re still here?”

I spot the guy who ate the fetal pig in my science class!  I want to scream in his ear “I cheated off you,” instead I just puke and wonder how he got me that “A,” while he jams his goldilocks head up and down at the rats.  Fortunately, the rats are here to stay.

I’m betting the rats will also keep away the snobby girls from Potomac Maryland who currently reside in that piece ‘o shit dormitory/apartment building in Murray Hill, then again I see a few of them wandering obviously lost to the world and to the stench.

I exit at Morgan Ave. to the onslaught of tweed hats posing in corners, hand rolling cigarettes, on the set of some faux movie- “Mcarren Pool Parties Were My Life.” But the pool has been shut down, the party is over, and now they are left with drunken Saturday afternoon inflatables on hot tin roofs.  Simultaneously, the locals prepare to rob the wads of inheritance cash that are carefully lodged up their 200 dollar Brazilian Bikini waxes. Yes, underneath those grass stained cut off jean shorts, beneath the Japanese tattoos, the Bumble and Bumble conditioned landing strips leading into 30-year-old unused reproductive organs- therein lies the last remnants of a Connecticut Suburban upbringing- the deep seeded hope that maybe, just maybe one of these bar tenders will settle down, have children, and move back to Connecticut with a job in finance.