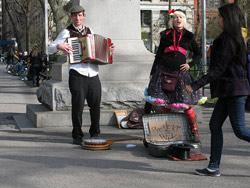 It’s New York City and everyone’s trying to make a buck, whether clamoring to the top of corporate chains, beating out hundreds of others for Broadway leads, promoting underground magazines or, say, playing music in a park. Does one not at least consider such public arenas as places where individuals can thrive and display their artistic talents without the regulations of permits and ticket prices? Well, it seems that these days in NYC, no work is found without the cost of trouble. A rivalry erupted yesterday between two of the park’s consistent musical sources – a young, rock n’ roll group and an embittered jazz band.

The jazz band claims the younger band is not allowed the primary park spots, which receive most tourist traffic – because they’ve only been here three years instead of six. A member of the jazz band who comes to berate the young rockers threatens that ‘it’s going down’ if they refuse to move. They refuse to move. The member explodes, verbally accosting. Since when did public space in the city, the only haven civilians and artists possess for freedom of passion, become a primal playground for cutthroat competition between common, working city-dwellers? Since forever, they say.

The jazz band explains there’s a hierarchy to Washington Square Park that has existed since the days of folk singers and public fornication by the fountain. There’s a gang-like aggression in their desperation to protect their territory. Flailing arms and ear splitting voices resound, catching the attention of passersby instead of the intended music. The jazz band claims the hierarchy to be as solid as an unspoken bible, that all, even new performers more modern and talented than the old, must respect it.

Unfortunately, New York, hierarchy requires challenge by new blood, by new bands, by new boys or else no opportunity exists for the breaking out of new voices. Just as in classrooms, in colleges, in corporations, the fresh-faced youngster must seize his chances for himself; but in the streets, he’s got a better chance. It is a cycle of the world, indifferent to the palms of sore losers. After all, this is America, and anyone inclined to scream from a soap box or over an acoustic guitar, is (supposedly) allowed to do so in public wherever they please.

In a world where it seems every soul is scrounging to make ends meet, must we create barriers for each other to fail by? Can’t we accept that whom ever came first to a public space on that given day is entitled to the share their voice? We want to enable a variety of voices, not a suppression of all others but one. We do not need censorship of our parks, especially censorship created by biased, battling musicians…It’s 2009. Censorship exists almost everywhere within our institutions.

But, please, folks, not in our streets. Anyway, let the blood spill…