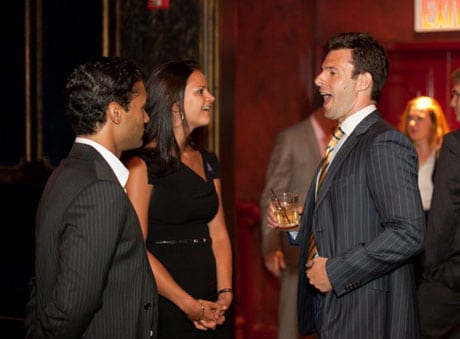 When I finally got a hold of Cy Vance, he greeted me with a firm handshake and a warm smile with a pair of expensive looking tortoise shell glasses. When asked about the idea for the party he stated, “I didn’t do a damn thing – I owe it all the Scott and Claudio,” (2 of his younger lawyers at his firm). Scott who was nearby added to the conversation saying that he “still thinks of himself as young” and “wanted to do something different at this hot venue in order for Cy Vance to garner a young audience.” When Cy Vance was out of earshot he also added that “he has never met someone who he has thought so highly of as a lawyer and had so much respect for” and thus this party was arranged.

Thinking of wanting to partake in the election, I curiously asked a question of my own: what he thought was the most vital issue that affected the younger generation in Manhattan today. He answered, “Domestic violence – a dark area where women are more affected than men” but overall he wanted to “promote healthier relationships.” Satisfied with his answer, I finally asked him about the turnout of the party, in which he responded “Fabulous! Wonderful!”

Once a strong believer that all things politics was way too square and serious, the Young Friends of Cy Vance, was an eye-opener for me. If this D.A. hopeful and his associates can throw such a boisterous party, I can’t wait for the revelry that will come along if Cy Vance is elected for the District Attorney of Manhattan.