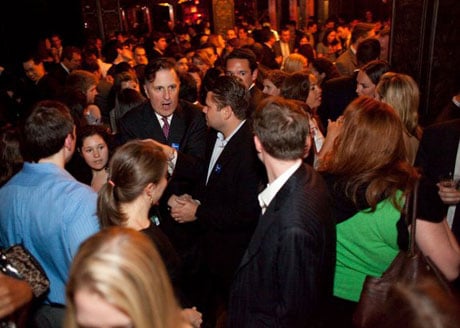 Perched on the ledge of the balcony on the second floor of the club The Griffin, I stared down at a pool of people oozing of money and power. The sea of black and white suits was interrupted only with splashes of color from expensive cocktail dresses. Several small chandeliers hung like a cloister from the ceiling at the center of the room, illuminating the entire room in a dim and sexy manner. People sauntered, they sipped and they flirted and seemingly it appeared a fitting place for a District Attorney nominee – Cy Vance to party at. The get together arranged by 2 of his Cy’s lawyer friends- Scott and Claudio was organized to focus on the younger population of Manhattan, which Cy Vance claims “is a very important group of voters to focus on.” Thus the event was aptly named: The Young Friends of Cy Vance.

Rewind back a few hours, before the once jam-packed crowd merely consisted of a few handfuls of people, the air was filled with hushed whispers and subdued excitement in melodic harmony to the jazzy music playing overhead. Plopping down on the golden sofa, I looked in front of me and saw champagne flutes filled to the brim with black, white and gray M&M’s. It almost looked out of place in the venue but I came to the realization that they were “young and hip” – an essence that Cy Vance and his team seemed to be trying to invoke for the younger generation. The plan seemed to have worked, as I saw several people doing a double take and stashing these foods in their pockets. As people began to trickle in, amidst the men smartly dressed in suits with wives that almost looked like accessory items, I also spotted the target group of young hipsters with their plaid shirts, ripped jeans and pastel colored tank tops roaming freely through the crowd. 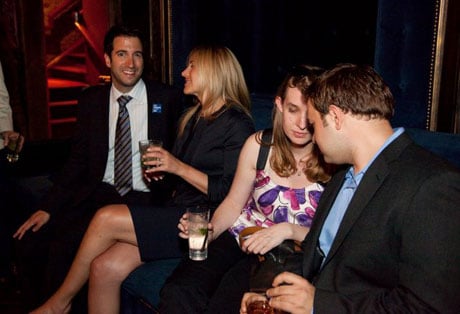 As time passed by, the crowd in front of the bar was massive – I’m guessing that everybody had a long day. People liquored up as the uproar of anticipation for the entrance of Cy Vance grew to a whole new medium. Finally at 8:15 PM Vance entered the club as people strained to get a look at him. He later jokingly claimed, “I didn’t come late on purpose, I was told to come at this time.” As the crowd tittered and dispersed for the man of the hour to get through the crowd, all voices were muted as he began his speech. Listening to him and his belief system, made me realize why the younger generation would be such a good voting target for his election. He is “100% pro-choice, strongly supports gay marriage and is actively involved in the fight to overhaul the harsh Rockefeller drug laws.” He believes in a fair justice system both uptown in Harlem, down to the Upper West Side, and all the way down to the Village. When asked later on how he would respond to someone who called his ideas too radical or liberal, he scoffed at the thought and said that was “a false choice – his system was grounded on making us safer and weren’t too radical or too liberal.”