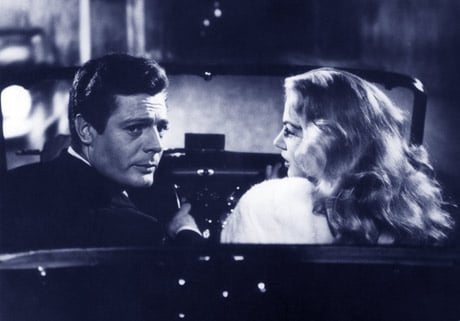 There’s a scene in the seminal movie ‘La Dolce Vita ‘ (directed by Federico Fellini)where the eponymous hero and obvious dilettante Marcello must decide between his love for the jealous girlfriend and the gorgeous star – played by Swedish bombshell Anita Ekberg. Yet in essence what he’s really choosing is between his passive regard for familiarity and the omniscience of capitulating glamour, aristocratic decadence and the velour of the eternal flashing camera which will capitulate him and his elk into a fabled existence. If one stops to think for a moment what Marcello as the reluctant paparazzo is deigning to do is in essence what our wider culture has vehemently and without second thoughts affirmatively embraced. In short we have become a culture for camera.

Everywhere one goes one can discern how our current culture has been redefined not to so much by the content of an event, the content of the package, the content of the campaign, the content of what lies inside the news but the way that package is packaged, the way the campaign, the model, the star, the fable, the wet dream looks. We no longer care what the star, the lead character has to say in so much as how they say it and how they look when they say it. The more glamorous, the more swoon, the more dramatic lighting, the more arc in the posturing and we are paradoxically sold. You can be a cold blooded killer, womanizer and wife deserter, but as long as you look glamorous and yield to a certain appropriated image we are willing to forgive you, idolize you, wait hours to arrive to your memorial service (ie Michael Jackson), new film premiere and the constant buzz spinning out of control twenty four hours a day, seven days a week.  Thank God you say, because you need it and anyway resembling God’s image is always nice work if you can get it- never mind if no one really knows what God really looks like.

Of course the question begs, why now, how did it all come about and why is it in so much over kill? Perhaps the better question may well be why haven’t we as a wider culture stepped back to wonder how feasible this all is, why it’s permissible to know what Beyonce wore at last night’s gala but not know what was said or discerned at a distant rally fighting say for human rights. Human rights don’t have a face, a look, but Beyonce she’s got curves, a great ass and a full time negotiating factor to be the wet dream we can never sustain in reality.

What consequently transpires is the heightened regard for photogenic people, the beautiful people and if one is to sway curry, valor and serious consideration in the running they too must conform to the demands, desires of the camera. Yet there are those who once in a while surprise us, defy the elasticity of the camera – Susan Boyle of the UK’s ‘Britain’s Got Talent’ show. Not in the least photogenic, and already condemned by the judges as she stood there taking long winded breaths before she knocked the breath out of the whole world with her graceful and heartbreaking rendition of – “I dream a dream from Les Miserables.’ The irony of her situation is upon going on to win, she was then coddled to transform her image for the sake of the camera and subsequently in due course suffered a mild mental breakdown. Forget the photogenic and chosen stars who daily rescind into mental break downs, of course all while the camera is in constant flux and you are tantalizingly intrigued and provoked, wondering when you too will get your private chance at stardom…

Perhaps this is what culture for camera represents, the new found democratic appeal that now everyone can be a star. It used to be in the old days that the only ones who got to be stars, were the emperors, the lords, the holy anointed (think Jesus Christ, Mohammed), the clergy and the gentry. That was until the camera came along, until the industrial revolution came along and spread the gospel that suddenly one could have mobility, fame, money, adventure and the captured grace of the transcendental . Of course the operative word back then when the silent camera first came out was talent. Now talent has been swapped and made comparable to blaspheme, on going faux pas and the continual ability to look fantastic no matter how un fantastic you were behaving.

Where now you might ask? More of the same, less of the same, flight from the camera or a mighty fight to make it in front of Patrick McMullan’s camera? Will we retreat, repudiate the over reaching images that have only now served to desensitize us and intoxicate us? Will we re invent the camera, have a camera  embedded as a chip in one of our eye sockets so we become the ultimate camera for culture.

No one can really answer these questions, least of all Marcello who by the end of the film gives up any sense of moral certainty to live in a continual but photogenic world of moral ambiguity. That is maybe where we are now, love it or hate it, repudiate it but fawn it, even the innocent like Susan Boyle changed the way they looked for the camera to only suffer a mental set back as the communal flash bulbs white washed who she really was so she could be who we really wanted to be…