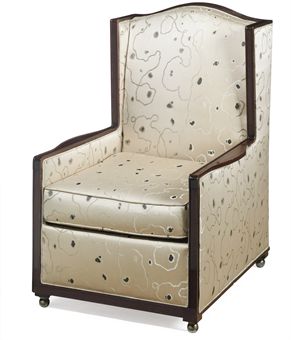 In an unusual move, architecture was the surprise star of Christie’s recent 20th Century Decorative Art and Design event. Around fifty potential bidders were treated to a reception at the famous auction house to get a sneak peak of the items up for bid at the following day’s auction.

Those in attendance were almost as unique as the items in the show room. The concept of a live auction in this day seems endearingly old-fashioned, but I suspect this can be half the draw for customers. How chic to say you purchased your latest ‘Line Vautrin’ mirror at auction rather than from some design house.

Guests on Monday certainly saw the appeal. Was this a party as pretense for the next day’s shopping, or was it the other way around? Fashionably-dressed attendees seem to imply the latter, just as teenagers dress to the nines just to go to the mall. Many were quite excited about the next day’s auction, and there was much to be excited about.

Unusually for Christie’s, many of the pieces featured were less from the art world and more from the where design meets function- namely architecture. Eyes were drawn to several Frank Lloyd Wright windows that were originally part of the same prairie home that is currently on display at the Metropolitan Museum of Art.

Jeni Sandberg explained that when Wright was commissioned to design this house the owner insisted that the windows be done entirely without color. Ever the rebel, Wright placed an almost imperceptibly small square of red in the corner of each window. I suspect he received no complaints- many of these windows sold in Tuesday’s auction for nearly $50,000.

Another piece of architecture that stood out was a Sullivan and Adler designed copper-plated post from the Chicago Stock Exchange, circa 1893. Apparently Sullivan was a notorious drunk in his day and few could stand to work with him, including Adler after this project. It is odd to think how some of Chicago’s most awe-inspiring architecture was built by a man who would most likely be completely unemployable in today’s work climate. It makes one wonder what we may be missing.

This emphasis on architecture is curious, as there are few, if any, modern equivalents to the famous pioneering architects like Frank Lloyd Wright. Perhaps it is time we are due for a resurgence.