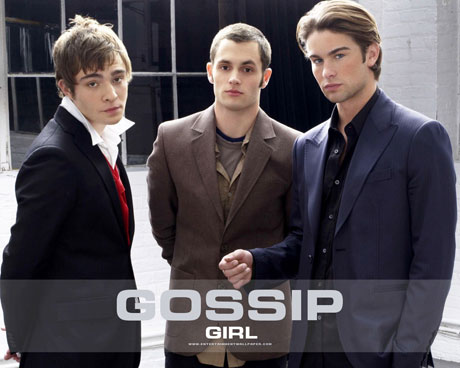 In case you have not checked out the hyper-sexualized Gossip Girl, (now in its second season) here is some motivation for setting up your DVR if you have not done so already—all for one imperative lesson in the spiraling effects of girl culture these days. If one has ever wanted entry into the nuances of girl culture and the privileged life advertised everywhere then one is ultimately obliged to partake in the Gossip Girl ritual.

After all weren’t you wondering what the “OMFG” and offensive steamy photo of two teenagers engaged in the act tagged, “Very Bad For You” print campaign was all about as you strolled down the streets of New York? Or perhaps you were wondering where those tween girls prancing around dressed like a 20-something year-old with a face full of ‘over the top basement sale’ make-up appeared from? Just tune in to the CW on Monday’s at 8/7 PM to what some say is a “guilty pleasure,” and you will get your answer. Then again you just might not either…

Narrated by Kristen Bell as the notorious blogger, “Gossip Girl,” this musically inclined teenage drama gyrates its story around the socialite youngsters growing up on the Upper East Side of New York City. And girls and boys alike from Generation Y from Long Island to Michigan are emulating the likes of these tawdry characters and trying to make it their own. With a culture obsessed with society, fame and money, this show fills the craving of those in need of the latter—and this just adds more fuel for the fire for all parties involved. Teenagers are jumping on the train to get Gossip Girled from the product placed fashions, language and music.

In the first episode, Serena van der Woodson returns back to her Manhattan private school after disappearing from boarding school during her sophomore year of high school. Turns out, this sixteen-year-old was formerly sleeping with her best friend’s (Blair Waldorf) boyfriend, (Nate Archibald) and decided to jet-set out of the state of New York and into Connecticut. When Blair and Nate are done frolicking, Blair decides to get back at her ex by sleeping with his best friend  (womanizer and ascot wearing) Chuck Bass. This is just the start of the causal malice this series exudes from the ongoing backstabbing that occurs in this certain set of the young, beautiful and rich of the UES. If one were inclined they could argue this is just training for what eventually goes on in the adult version of Park avenue, but swap nannies for wives and you get the picture.

Having New York social fixtures like Patrick McMullen and Tinsley Mortimer guest appear, and shot at locations like The Box and 1OAK, (the current designated in spot for a certain collective) one is let in on the secret that the show itself is more often inspired from reality and less than the fictional book series the show was taken from.

Viewers are also engaged with the progressive fashions ranging from Zac Posen to Nanette Lepore that would make any girl drool, and you have yourself quite a sleek and glossy soap opera. Watch out New York! GG has succeeded in illustrating that the UES society has began to trickle its way into the mainstream. Rumor has it that recently, tour buses loaded with screaming fans have been stopping at the various sites spotted in GG—willing and ready to stake out Dylan’s Candy Bar out for a sight of Blair.

Investigating the lives of these over-the-top superficial beings, assures us that GG has in fact become every parent’s nightmare from the steamy sex scenes to the numerous drug innuendos; you know that when the Terry Richardson shoots the two main actresses for the cover of Rolling Stone, we are all in trouble. Of course Gossip Girl is only too happy to indulge in such debauchery, and we to watch it.

Perhaps the real trouble occurs when fiction starts imitating reality too closely and then inverts upon itself by becoming a weirder kind of fiction than one intended but whom everyone is running over themselves to imitate.

So much for gossip…