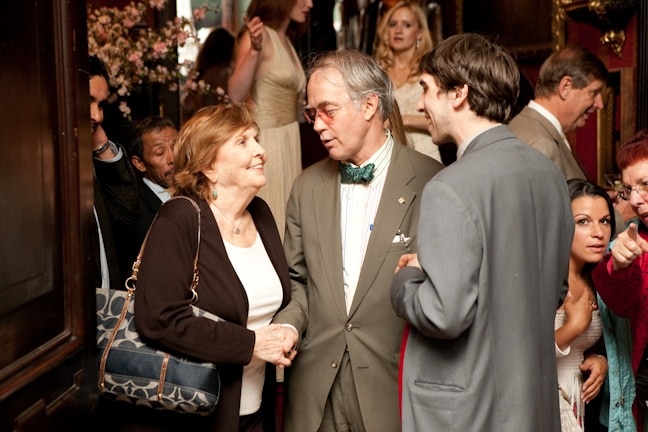 It can be intimidating at first: the highbrow, polysyllabic witticisms; the silent, lidded, critical assessments; the nonchalant stances (always the nonchalant stances…) as the dimensions of one’s success is overviewed—the Open City Literary Awards, tucked into a little pocket of Gramercy Park, was fabulous and only lightly peppered with socially irreverent scamps.

Of course, there were those who were speaking to ladies with a generation gap and those who forgot the last three buttons leading up to their collars—these things are inevitable in any congregation. Though it’s only the impoverished for which it’s essential to fashionably represent.

Assuaging the scene, one could discern that the crowd complimented a certain vibe, intent on remonstrating their verve for literary ennui. As one followed the grog, the literary insinuations, dramatic pauses and the correct posturing (it always needs to be correct) one would eventually encounter genuine earnest laughter. Of course such are the affairs of a certain social denizen…

The first person I ran into was Vanessa Lilly, a contributing editor to the magazine Open City that was just released and on display.

SCV: So, what do you hope to accomplish from this release of the magazine?

VL: I’m hoping that we get more literature and readership and success with it; our whole aim is more, more, more.

SCV: What then is the aim of the magazine?

VL: Well, what we have here is a reflection of moments in time from a series of locations around the city. Both through stories and poetry, so many perspectives are introduced from the varying experiences of New Yorkers from different communities. This book grasps these different experiences, and gives an intimate view of what it’s like to live here, grow up here, and whatever else you may do in New York.

SCV: How did you choose which experiences to integrate into the work?

VL: I wasn’t looking for anything in particular; I didn’t have a set plan or structure or checklist. Whatever really moved me and fit the vision of the magazine was included. Sometimes it was a hard decision, but often, it was very clear what I should include or exclude.

SCV: I see! Any other thoughts?

VL: So many people have contributed work and donations to Open City, and this is one of the results. So, hopefully this is a huge success!

It’s endeavors like this that sustain the writer’s necessity to society—rather than the usual imperialistic approach to all matters involving profit, this particular venture aims only to fulfill the very essence of the writer in reflecting perspectives and experiences that are usually inaccessible to all but those who harbor them. In fact, Open City is published by Open City Inc., a nonprofit organization dedicated to the support and proliferation of contemporary literature in New York City.

Re joining the fray, I observed women in very short skirts, their hair pushed back and looking into the eyes of austere, affluent men. From there one could have imagined a clever comment or not…

In the main area, I ran into a very tall and handsome gentleman who I came to realize was one of the two main editors of the magazine, Thomas Beller. Towering over me in a way that, thankfully, was in no way imposing, he graciously gave me a few moments:

SCV: Yes, yes, I’ve noticed, a lot of well-dressed and intellectual individuals, but there are a lot of open collars as well.

TB: You have to have that, the variety.

SCV: So what do you think of all this, definitely a success?

TB: Yes, it’s very nice. We do this every year; a woman named Joanna and I, we edited this magazine, and we’re very pleased with it.

SCV: What exactly do you consider successful about it?

TB: The work that was submitted was very exciting; we have a lot of talented authors that contributed to this release. Everyone who made this possible worked very hard, and it’s evident.

He turned to address the small group he was speaking to at time; I turned to see if there was anything I was missing. Apparently, there was an entire art exhibit going on in an adjacent room; I followed alcohol-weary patrons to a stark white hallway lined with poignant paintings of women contemplating their lives in various ways in the nude. From there I made my exit past smokers accumulated at the front holding existential conversations. Their philosophies and intellectual banter danced with the smoke as it disseminated into the gloriously tepid and inspired night.