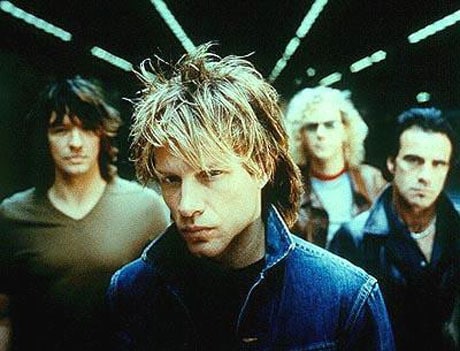 Being a rock band is a big business these days. If one listens to Jon Bon Jovi tell you in this modern day parable documentary being a rock star is more than being an icon it’s also about being a CEO of a multi national corporation. Of course you and I are the unrelenting shareholders to this unstoppable fancy, then again being moved to tears is more than part of the fun and Jon Bon Jovi know it, even if they don’t like to let on…

If one is interested in deconstructing the American mythology of rock stars one had to turn up to last weeks preview of Jon Bon Jovi’s – “When we were beautiful.” The lines wrapped around the block and desperate attempts were made to get in, be seen with the stars and get a first hand look (while they were in the cinema with you) what magic, hard work, commitment and ‘living on a prayer’ could be all about.

When the movie first starts- it takes us to the place where it all began 25 years ago- Madison Square Garden-NYC, where we see Jon Bon Jovi reminiscing and having various parts of his body massaged in lieu of his momentary stage performance. One is reminded that this is what sport stars, football teams and even boxers go through before they exit the locker room and enter the void called our virtuous existence.

Suddenly we are thrust into a hotel room somewhere in Dubai, watching Jon negotiate sponsorship deals, world wide gigs, accounts, promoters, lawyers (which one gathers he doesn’t particularly love but tolerates) and the reason that he has become larger than life when that life in his own eyes has become a whirlwind of hotel room, lobbies, stage sets and SUV’s whisking him away when he has bared his soul, which leaves him in mind stupor back in a dark hotel room. Fame can be lonely, even in front of sold out 70 000 crowds.

Jon of course takes this all in stride and if he can sell out a desert more than twice he’s more than game, and it’s this primordial urge that coincidently keeps him vigorous, committed and enigmatic. Some of us are content to sell out an intimate locale, others on the other hand have block buster visions, and sitting there in the dark room – itself intimate and weirdly aloof one can only wonder what type of person it takes to get there and of course stay there.

As Kid Rock, seminal performer himself attests –“the song has got to be bigger than the trend, it’s when the trend is bigger than the song is when all the others fall by the wayside.” In a culture consumed by trends, predictions, surveys and twitter and facebook sightings it’s a big thing to say. Of course that said, is anyone really paying attention to what these masters are saying or are we just happy to make it to the top of the summit, claim we were there before being toppled by the next trend or infomercial (quick hire the best pr firm you can find)? Then again profit and fortune know no sure fast rule, in the end it’s arbitrary, if that’s what you believe but watching the band pontificate, reminiscence about personal demons, their faith and drive to be super hero’s (if not for themselves or at least for their fans) one is inspired to wonder otherwise.

As the camera finally takes us back to the beginning of the film where the lads are awarding their loyal and hard working ‘corporate team’ of grips, backstage help and musicians medallions one is aware that magic knows no bounds. Whilst voyeuristic films like Steven Soderbergh’s “The Girlfriend Experience,” can offer instant and wishful identity (for a steep price) one can if they are willing to pay a personal price can sometimes rise to the top on their own merits. Otherwise we’re just living vicariously through our heroes who coincidently struggle with their own beauty…