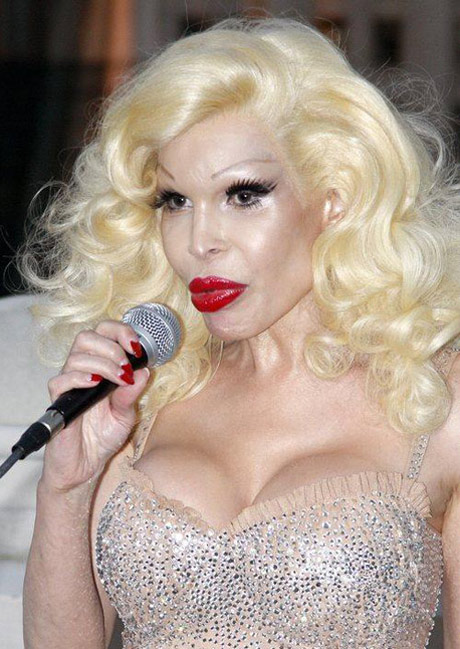 Chic and sleek characterized the upper-level, upscale Depesha mag designer charity auction at the Helen Yarmak Showroom on May 21st. From the beautiful faces to the immaculate attire, everything was aimed to please, but none more so than the artwork reflected in the intricate tapestry offered for bid by twenty-five renowned designers. Flashes twinkled as shutters clicked while New York’s class-(beauty?) conscious duly posed on the balcony.

At the center of attention was beloved Amanda Lepore.

SCV: Well! How do you feel about this event?

AL: It’s so nice, it seems like quite a success.

SCV: And what did you hope to accomplish, hosting this event?

AL: Well, as far as I understand it, it’s for a charity for Russian children. It’s the least I can do, to come out and support. Really, I didn’t even know what I was doing, but I knew it was important to attend, since it’s a charity for children.

I had barely taken a breath before she was consumed in the fervor of journalistic fray and high-class socialite intrigue. Is it support to merely be there? Perhaps—one could say that she fulfilled her purpose exactly. Adding social clout to the event, it was clear that the attention she was attracting was a reflection of the success of the charity auction itself.

Indeed, I heard no discussion regarding what Russian children must endure. Neither were there any materials that reflected this information. Further, the mood was jovial, and attendees may or may not have had any concern for the world at large or its problems. But two things are clear—now we know that there is a sincere disenfranchisement of Russian children that deserves institutional attention, and Depesha has risen to the need and facilitated a rather aesthetically pleasing event to help.

Anyway we all looked beautiful, and if you care (and you should) here’s more information below;

Founded in 1926, the Russian Children’s Welfare Society (RCWS) is dedicated to improving the lives of children at risk in Russia by supporting orphanages, hospitals, homeless shelters, rehabilitation centers for disabled children, educational scholarships (currently we have 42 students), and a major New Year party in Moscow for over 2,000 disadvantaged children. RCWS relies on private donations and special events such as Annual Petroushka Ball to support its various programs. www.rcws.org