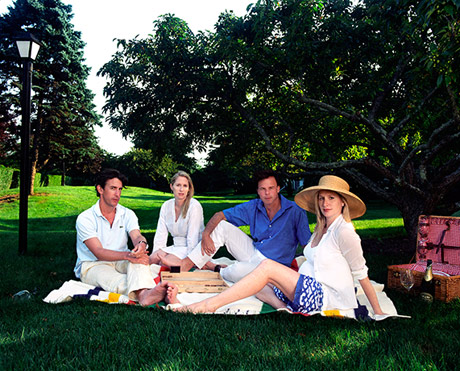 SCV: Yes, but doesn’t this lend itself to a kind of parody of itself?

AS: Exactly, how can it not? It’s almost too extreme and out of context of what is actually going on. If anything it’s a wet dream interpretation of a preferred reality.

SCV: Well, if one looks around our current cultural landscape it’s almost come to the point where one is expected to believe they are the image of themselves in the society page.

AS: I think it’s come to the point ‘ hey let’s forget about any bankruptcy, diabolical undertaking that may be going on in my personal life, as long as I look perfect, just did my nails in all probability I’m probably perfect after all.’

SCV: Or nearly…. Looking at some of your work, for instance the depiction of the young lad in his chair in his upper east side boardroom one gets the sublime sense that in fact not all is perfect in ‘perfect land.’

AS: Yes, I wanted to show in very subtle ways the juxtaposition of this perceived privileged life and the neurotic clues that in fact despite the look of it all not everything is in fact perfect.

SCV: Yes, the ink scribbles on his hand, the terse expression on his lip, it’s great, it really  betrays some unhinging in the ‘Camelot’ castle…

AS: It’s important to highlight the incongruities but in a way that’s palatable and innocuous.

AS: I think one can garner more attention to a set of ideas by turning up to the dinner table dressed and behaving civil. What they have to say at the dinner table doesn’t have to be too civil, but as long one looks civil, one is bound to inspire imagination and contemplation.

AS: Yes, it’s what people relate to, it’s none threatening, but if done in a particular way can expose all the incongruities one may hope to explore within the veneers of what passes for traditional and safe.

SCV: I’m curious by the fact that your pieces don’t have titles. Why is that?

AS: When I create my work I’m not creating from the point of view of the subject sitting in the chair but rather this idea in my mind. The subject just so happens to be a prop, there to accentuate what I’m willing to explore as opposed to the outright focus of what the work is about.

SCV: How does this then inform the way you actually go about putting your work together?

AS: I always have an image in my mind and what I’m in effect doing is scouring the universe for subjects, landscapes that come close, that help me accentuate the ideas that I’m interested in exploring. What then happens after I’ve taken the actual physical picture is to go back to the studio and for weeks sometimes treat, photo shop, paint if you like, the image until it begins to approximate the idea in my mind.