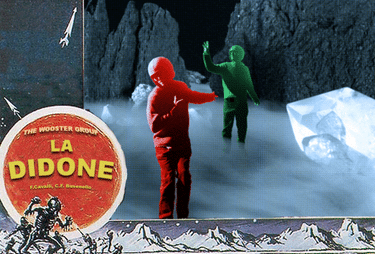 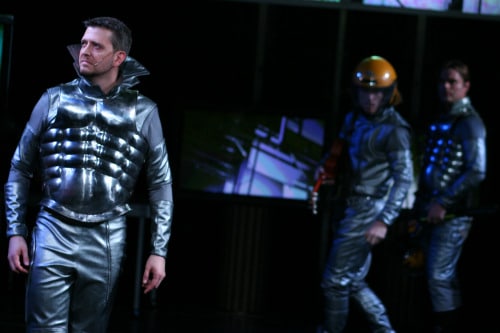 There are many things in life that come with diabolical manifestations, repercussions and metaphors, Elizabeth LeCompte’s Wooster Group’s production of ‘Le Didone’ happens to also be one of them. What ensues during the high tech, high opera and in many respects low brow manifestation (or let’s just call it camp) performance is the awareness that at the end of the day ‘life is meaningless, absurd, and one is often reduced to absurd rationales to try and come up with rationales for what happens around us and within us.’ All one can hope is that the species can somehow survive despite itself.

Even before the actors, a mélange of astronauts mimicking the performance of a 1960’s mock sci-fi movie (which plays intermittently on video screens behind and next to the actors) actually come to breathe on the stage we are sitting in our chairs aware of some catalytic foreboding. With brooding mechanical electronic music the tensions builds until the actors come forward – all in a desperate attempt to regain control of a spaceship that has veered out of control and into strange un chartered waters. The next thing that happens is we cut into a surreal slow motion phantasm of opera, the lyrics are indeed alarming and ghastly- (in opera/latin– “Sucking the blood of my  offenders, hour after hour…”) 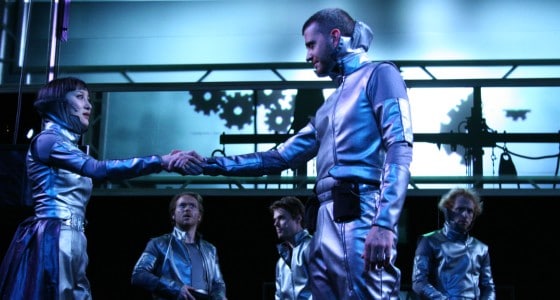 From there one is left to wonder, delight and try to reconstruct in their minds what exactly is going on. As much as the mother ship veering out of control suggests a cautionary tale or expose of an individual, collective, nation, civilization running askew and wildly out of control (if the recent G20 negotiations and bank failures are perfect metaphors), it also suggests hope and determination of the individual intent on finding meaning and solace in the absurdity of his own being and the universe at large.

The stories collide, weave, interact, and then go off on hilarious tangents, searching and hunting for wild boars, a wild opera singer/astronaut and the captain who loves her and betrays her can represent many different parables and at the same time be so delusional and of mock absurdist value one doesn’t know whether they should laugh or cry. It continues back and forth and for a while, you don’t know if you are watching a mock Italian space movie about alien snatchers or a reverse role play in a mid century tortured Baroque love story, as by now it is a free for all as characters jump in and out of movies and opera. This I suspect may be Ms. LeCompte’s intention…

One’s mind and heart is continuously being overloaded, as if we were been asked and forced to take not just one but three big dipper rides all at the same time. From the rock guitar, to a mandolin type instrument, accordian, the musicians stand to one side of the stage weaving into the cacophony while on the other side of the actors reside a high tech ensemble flicking and disassembling switches as screens change, slide forward and electronic monitors bleep away.

One is often served a crescendo of experiences, from the high camp gestures and intonations of the actors mimicking a 1960’s sci-fi movie scene for scene alongside a baroque opera –La Didione, which at first may seem way out of place is in fact so resiliently in place and serves to attenuate the drama and fantastic discord on board the mother ship and the strange world and strange experiences we and the actors suddenly find ourselves in.

By the time the production comes to a finale, a production which took two years to rehearse given the synchronized movements, music and opera (and video deluge) one is left both gorged and salvaged ( even if half the actors have been mauled, shot or have had their identity stolen). It reminds one of Samuel Becket’s masterpiece “Waiting for Godot,”- Godot is bound to arrive if only we knew where and when, nevertheless we spend our days waiting for something to happen.

Nay we spend decades, centuries, inter planetary galaxies and universes, camp, body snatchers, bleeping video monitors, high opera and the visage of actors violently crooning for salvation and meaning only because we passionately want them to.