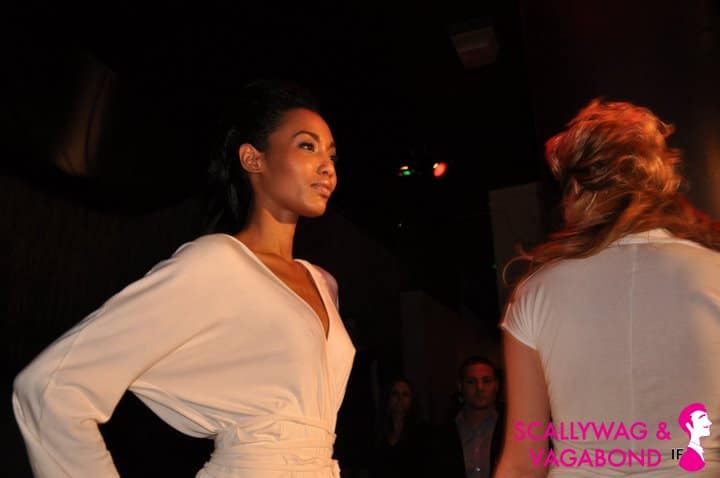 Follicles bursting with fur streaked blond standing on end around a rather small head.  Ex-headliner of CATS or tonight’s hair dresser?  Let’s go find out…

“Did you do any work for this show?”

“No, my friend is a sponsor.  I run a Dex Studio, just finished shooting Brittany Spears’ clothes.”

“You took pictures of her in clothes or just of her clothes?”

“Well I think you missed.” 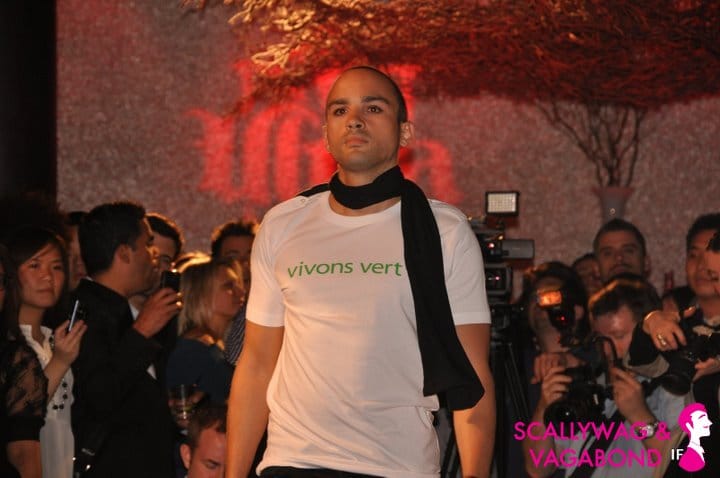 Next we have Bergit from Deutschland who prefers America to Germany.  When not working for an airline she models, but ultimately wants to do some sort of non-profit work in the same eco-friendly green vein as tonight’s fashion show.

“What is so much better about the states than Germany?”

“But you have such great music.  Do you like techno?”

I take a seat next to the runway and wait for the show to begin and notice some ex-partners in crime growing like ivy on silver haired ladders and wonder if I should be speaking to whoever it is that they’re speaking to until I realize I’m that who I’m sitting next to is all I really need.  She’s a beautiful girl from Switzerland, a PR, whose name just happens to be Sabrina.

“I tried one of the scarves from Marchuska’s collection.  It was so soft, so comfy I didn’t want to take it off.” 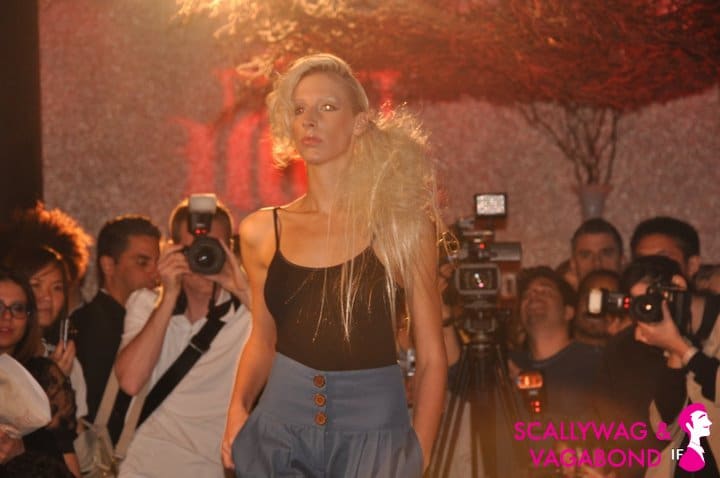 But tonight’s show didn’t just consist of pieces by Christine Marchuska. It kicked off with three looks from ELSAandMe, designed by Maja Svensson and eight from Global Ghetto Organics, a brand conceived by the well established artist and designer Steve Sas Schwartz who has been in the game since the 80’s.  An accomplished contemporary artist who’s works have been exhibited in the MOMA, he also was a founder of Skate NYC in the East Village. All three companies incorporate an emphasis on making eco-friendly clothing from sustainable fabrics such as bamboo that are actually fashionable enough to wear outside of your yoga class.  As the amateur models did their best to not look like deer in headlights, the clothes for the most part where quite nice, particularly the leslie dress, a micro-modal fabric blend worn by the stunning Rayuana Aleyce, not to mention the only girl who could strut.

Regardless of the other model’s abilities to present the clothes properly, they still looked great despite a lack of color, and eventually we will become accustomed to seeing clothes made in this way as the world renews itself towards sustainable goals. Here we have three landmark companies that are doing what should eventually be and without a doubt, eventually will be the protocol for all other clothing manufacturers.   It’s an advance in the right direction and their success is imminent.   Now if only these models could get in step…