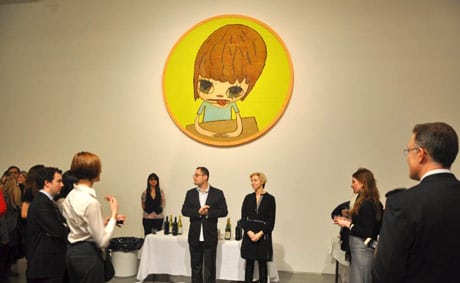 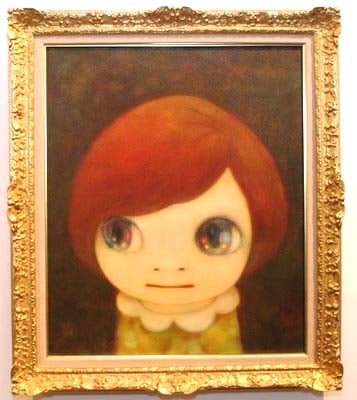 The innocuous little moppets so delicately existent on Yoshimoto Nara’s canvases reversed the role of ‘gazer’ and ‘gazee’ at the Marianne Boesky Gallery in Chelsea last Friday. Coming straight from Japan, totally unaware of the language and culture of Chelsea Art gallery goers, they first seem to stand there, vulnerable at their young age to the judgments of their elder counterparts in front of them. As one stares longer into these misleading eyes, however, this preconception vanishes in a flash. With hands clasped behind their backs, mirroring the poses of the audience members, each innocent little creature has her own automated message to send through wiggly waves to our own eyes. The overall message being  “don’t mess with our world, and we’ll shower you with lovely glittery glances.”

Inspired by Japanese Manga and Anime culture, Nara is part of a new style of Japanese art which is giving the comic strip subculture global attention. Even though Roy Lichtenstein was one of the first to negate a similar gap between pop-culture and high art, there persisted a mentality, perhaps fueled by old aristocratic money, which still undermined such artists until the mid 1990s. Murakami, also previously represented by the Marianne Boesky Gallery, was one of the first to have popped through this brainwashed bubble with a bang, to give way to a new appreciation for Japanese new-age culture, a trend which Yoshimoto Nara is now perpetuating.

Each of his Tamagotchi meets Madeline meets Coraline Pixar-like creatures are maintained within their 2-D hazy, dreamlike atmosphere by a simple construction of flat fields of colors. Two beady eyes plus two delicate little nostrils plus two rosy puffy cheeks minus a background is the mathematical formula which Nara employs. The lack of background is a clever device which makes their stares all the more poignant as the viewer is forced to maintain focus on the personage. In short a defiance of non-unique expectations of pop culture is made. 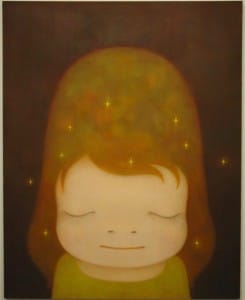 Although Nara’s artistic style leans towards subtle gradation of pastel colors, the characters portrayed are very blunt and all contain a certain buzzing intensity. Each one represents a different figment of Nara’s fertile imagination and alternating moods. At times the mood is disturbingly confusing, as represented by the long haired obeisant schoolgirl with two darling little fangs protruding her lips. At other times the mood is absolutely endearing, such as the bob-haired girl wearing a conservative peach dress staring with a certain wonder in her sparkling eyes through the door of one of the installations in the back room.

These vertiginous ‘Tim Burton-esque’ tree-house installations in the back room are part of Nara’s latest devise to counter the high art market. As Marianne Boesky herself pointed out to the Contemporaries members last Friday, Nara’s efforts are aligned towards sharing a message of each and one of his little disciples in his serial work. So sorry collectors, instead of alienating one of these charming faces within the confines of your luxurious abode, you must buy the whole tree house in which she currently hides, along with all the accoutrements (don’t forget the country-playing Boom box!). 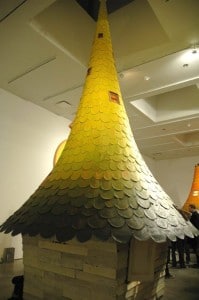 Team Yoshitomo Nara, which includes his disciple children, reminds us that we are all internally children, no matter how old we are. The Marianne Boesky Gallery provided a space in which the role of the judging viewer was left open ended. Is the collector to judge what is high art? Or is the artist to manipulate the collector, as Nara does with his tree houses. Finding a new approach to making and selling art today seems virtually impossible, but Nara has found a way to trick us, both in his work, and through his work.

The childish cartoons may at first seem harmless, the viewer will find more disturbing and perplexing qualities as he further stares through their entrancing iconic eyes. Although the playful atmosphere inflames his curious voyeuristic impulses as he approaches the impenetrable tree houses, the game mood is killed when he realizes he is being manipulated by the artist as part of a critique of the art market, and those who perpetuate its VIP policy.

Nara’s work definitely resembles an estranged creature ready to mark its territory in Chelsea and the world abroad.