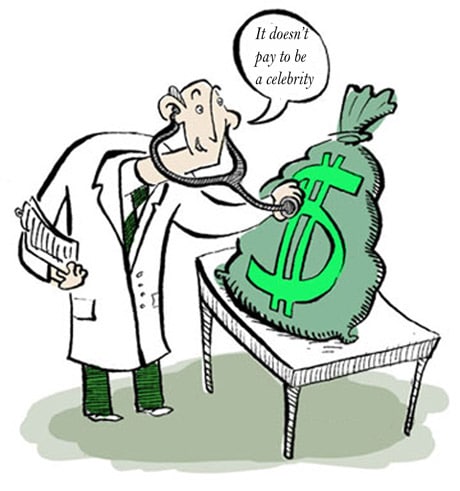 To fabricate celebrity costs money. To exploit it costs even more. The more money in the industry the more it seems are the numbers of celebrity. So what happens to the conveyor belt of mass talent in a bad economy? Does production cease? Or does output simply shrink…

Forget about real celebrity, just as it had become all too easy to buy a Chanel bag on the street for $15, so too had ascending to stardom lost almost all of its unattainably. Of course, real Chanel is incomparable to its counterfeit. For one, the real deal lasts for years and ages well, whereas its imposter falls apart after an a propos 15 minutes.

Doubly, just like with a knockoff bag, an authentic celebrity would never be seen with a talentless hack. Albeit George Clooney did find himself in a tryst with a flat-chested Fear Factor mistress, it took less than the time it takes for a newly discovered waitress to get a boob job before he pulled a vintage George and kicked her ass back to the cruel worm-eating, vodka-shot pouring curb. Suffice to say, there are tiers of talent. And just as with the classes, they don’t often interact.

So what is celebrity, exactly? It depends on who you ask: to the industry-driving Generation X and Y’s, fame is about being loved and fitting in, being glamorous and being hip. Regardless of talent. It’s a popularity derived mostly from meaninglessness; high school for grown ups. And it’s the same absence of craft which most of today’s goods lack. It seems only natural once we’d exploited these resources to their end, we’d stop embracing the excess of empty glamour like we first did.

What’s the fate of celebrity then? My magic 8ball says “outlook not so good”. And while celebrities often get away with breaking social law, they’d be hard pressed defy those of physics.  Without botox anyway. What comes up must go down. And just as 2001 recession recovery saw the meteoric rise of the likes of Jessica Simpson, Brooke Hogan, Paris Hilton, Kim Kardashian, even Kate Hudson and Jennifer Aniston, we’ve already been watching them slide back down, some, of course, more embarrassingly than others.

But it’s not just the rise of talentless celebrity under fire.  There are many over-inflated egos on their way back down: bankers, shakers, luxury good purveyors, artists, gallery owners, advertisers, media glorifiers, real estate companies and their wheeling dealing brokers… Had we simply overvalued the artifacts of our time in an overestimation of our own humanity?

Just as Chanel flickers in and out, but never truly fades, the real talent will remain. Maybe the scripts aren’t as good, or the parties as glam, but their agents will keep them stocked and ready for recovery as the stars themselves keep from making shocking headlines and embarrassing stories.

So aspiring stars be warned. The well’s dry, our patience tried, the production line’s practically at a halt. But if you’re willing to hone your craft and do it with sass we might just find ourselves charmed by your twinkle in this dark economic night.