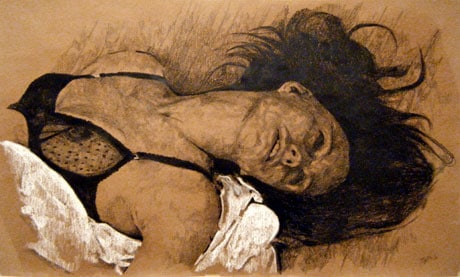 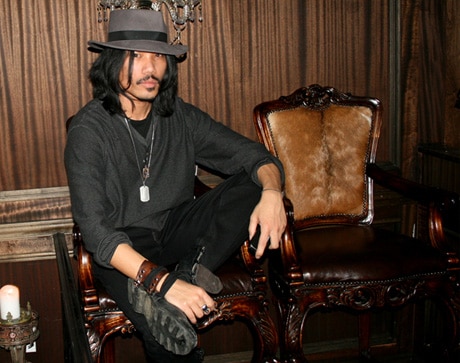 On the back of his wildly successful solo show we decided once again to take Skye Nicolas aside and ask him some more compelling questions. After you finish reading this compelling interview you’ll agree with us that Skye Nicolas is his own murdered beauty.-Scallywag.

There seem to be a variety of symbolic juxtapositions in your work. The women are dead but still possess the power to entrance- the fatal and the fatale. What is your take on such said themes?

The “murdered beauties” of the Mortelle series certainly do exude lethal, yet mystical qualities; and the ironic combination of these contextual elements paves the way for an enticing visual experience.

The manner in which the beauties are posed, as well as the “lager than life” size of each piece, immediately baits and hooks the viewer’s senses. One almost forgets that they are looking at the image of a lifeless corpse as sensuality will always linger in the presence of physical beauty.

It’s part of human nature to be curious and to explore the dark corners of our psyche where all our secrets and inner perversions roam free. Ultimately, the allure is simply inescapable: an irresistible guilty pleasure we just can’t seem to ignore. 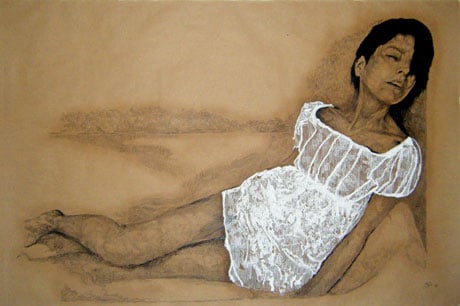 These ambiguities are highly reminiscent of film noir and the mysterious essence, the ephemeral yet concrete feeling that we personally perceive while viewing such films. Are you creating your own sort of film noir in your exhibitions?

To be honest I wouldn’t want my work to have ephemeral qualities. I would like people to be swept off their feet and overwhelmed whenever they see my work; not only by its beauty, but also through the inner dialogue they create when viewing it. Since the Mortelle series was inspired from classic film noir, all of the obvious elements that come with this particular style of filmmaking are evident, but it’s always a conscious effort for myself as an artist to create lasting and memorable impressions.

Are you then the private eye, the private investigator, and the models the femme fatales? What role does the audience play in your film noir? 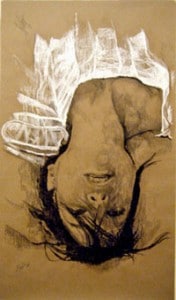 I step out of the role of being the creator once the artwork is displayed. Each piece illustrates a fictional character and crime scene, and everyone is free to choose which role they’d like to play within their fictional storyline. They are encouraged to let their imagination run wild and add their own plot and conclusions. It’s fascinating as the artist to become part of the audience; to become one of many spectators in which everyone is a suspect.

What and who has influenced your work, you seem to pay homage to Renaissance artists like Leonardo Da Vinci who used silver point, white chalk techniques in creating pieces like “La Scapigliata” or “Study of Leda.” ?

While the techniques I use can be traced to the Renaissance period, my method of painting is specifically influenced by the French impressionist movement. Although he abhorred being called an “Impressionist”, Degas was one of my heroes during my early years in art school. The way I apply white oil pigments onto brown paper, as well as the placement of defining dark outlines, was something that I learned from Degas.

The use of white chalk is characteristic of the classic method of drawing exemplified during the Renaissance. But chalk is almost impossible to fix onto paper, which is why the Impressionists substituted chalk for some of their pieces, using oil pigments instead. My method of applying white oil pigments simply mimics the early white chalk study drawings that date back to Da Vinci. I studied the Impressionists and Degas’ techniques very closely, doing a lot of research and experimentation before I came up with my own style.

The fashion industry is often critiqued for undermining the singularities, the individual personalities of models. Have your models expressed how they feel different when they pose for a painting/drawing than for a fashion shoot? What sort of preliminary advice to you give them (in other words how do you set the stage for them)?

The preparation of my work is influenced by fashion photography, as well as composition aesthetics that are deeply rooted in French impressionism. I work straight from photographs, and perhaps the subtleties lie within the mood and intimacy that is experienced during the photo session. It is important to make sure the model feels comfortable in their skin and relaxed during the session. This way, you can capture those elusive little details and expressions, which I can enhance, flesh out or even exaggerate during the process of creating a piece.

Mary Ann Caws, an art critic, argues in “The Expanding Discourse: Feminism and Art History” that women in art, especially surrealist art from the same era as the film noir, are depicted for the sake of the viewer’s consumption, as well as that of the artist. Would you agree with this, and is this applicable to you in any way? 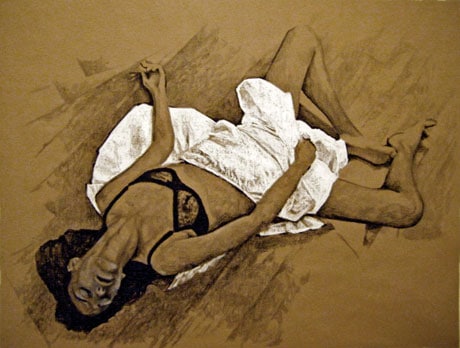 In the end it’s all a matter of personal opinion, but isn’t all visual art ultimately consumed by the viewer? I try to not subject myself to the criticisms and arguments that originate from socio-political beliefs. I unapologetically express myself through my work. My art is simply a celebration of what I personally identify as the highest form of visual beauty, which is the female figure.

Your main interest is in combining fashion and art. Explain how you do this in your “Mortelle” Series. Is this a new sort of advertizing scheme that you would propose to the fashion world- using art to capture a unique essence like the French Impressionists rather than photography?

Although I am influenced by fashion photography, my main interest is to express myself through my work. There is no conscious plotting of schemes to get the attention of those who work in fashion. 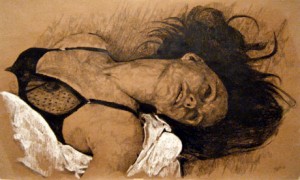 Creatively, it would be interesting to see a collaboration between the art world and fashion. I welcome the idea of commissioning a fine artist such as myself to create unique pieces for a fashion label’s ad campaigns.

Just a few questions regarding your background- where were you born? Your said you studied art history in Asia- how is it taught differently than in the West? When did you move to New York and why? How has New York influenced you work?

I was born and raised in Manila. The manner in which classes are conducted there as opposed to the west is fairly similar since most of the educational materials and books are either made or published here in America or Europe. I moved to New York in 1999 after a talent scout took a polaroid of me while walking the streets of Seattle.

Although New York is hailed as one of the major art cities in the world, my work is not in any way influenced or inspired by the New York art scene. I was more inspired by fashion photography after being exposed to the fashion industry; hanging out with photographers, stylists, models, bookers, magazine editors and publishers.

With the economy and the vacuum that has been created a lot of artists are now exhibiting their works in intimate spaces whose primary purpose may not be showing the works. For example, some will have dinners where they exhibit the works on the walls and invite prospective collectors in order to seduce them with the works. What do you think about this more personal way of exhibiting works? How do you plan on exhibiting your own?

Well first off, most people who are involved in art do not have a choice since most gallery spaces are closing shop. So artists, curators and dealers are finding new creative ways of displaying the artwork. Curators and artists will not only have to find alternative spaces that fit with the theme or mood of the artwork being exhibited, but they also must continue to work within the show standards they have set for their collectors and potential buyers.

The Mortelle series was unveiled during New York Fashion Week at Ion Studio in Soho: a beautiful, almost ethereal space which mainly functions as a high end salon, but also hosts art openings and displays fine art for its select clientele. Founded and owned by three top Italian hair stylists, the people behind Ion flawlessly demonstrate the functionality of a multi-purpose space while still keeping standards remarkably high.

I will soon start working on a new series entitled Les Profiteroles, named after the delectable French dessert. I would like to have the exhibit at venues that naturally fit the concept of the series: iconic places such as The Plaza Hotel on Fifth Avenue or the charming restaurant, Serendipity would be perfect.

Where does the name Skye come from?

Wouldn’t you like to know. We’ll save that one for next time.

Justine Chausson has written for Artlog, EFG Gallery, the Tribeca Trib, Couleur Magazine, and Katya Leonovich’s The Anticipation of Passion.

She has interviewed artists such as Katya Leonovich and Terrence Koh. She is currently working for Scallywag and Vagabond.

*Specially commissioned artwork must be booked in advance.