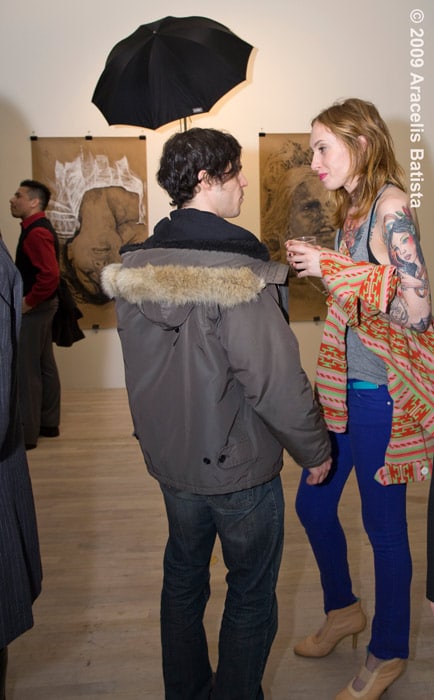 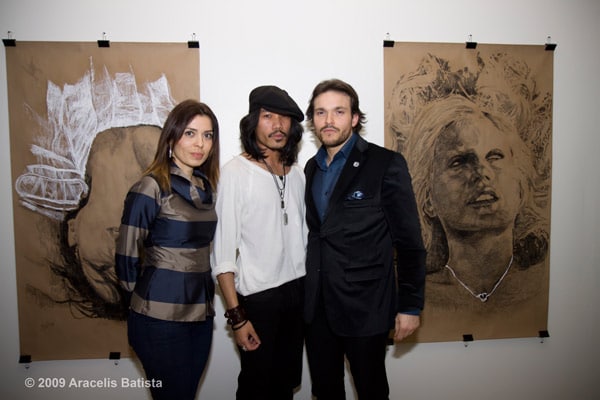 “Just kill them!” ordered Marlon Richards of Skye Nicolas; and the “Mortelle Series: Act I” was born. How can beauty be captured without repeating the clichés of art history, the enticing curvaceous Venus of Urbinos, the delectably innocent Daphnes? The answer was revealed to invited guests at ION space, a high end SoHo salon turned gallery space for the night, which generously opened its doors to Skye’s five femme fatales and benefactors-Robert S. Kruschbersky & Hale H. Yamakoglu of United Creators. 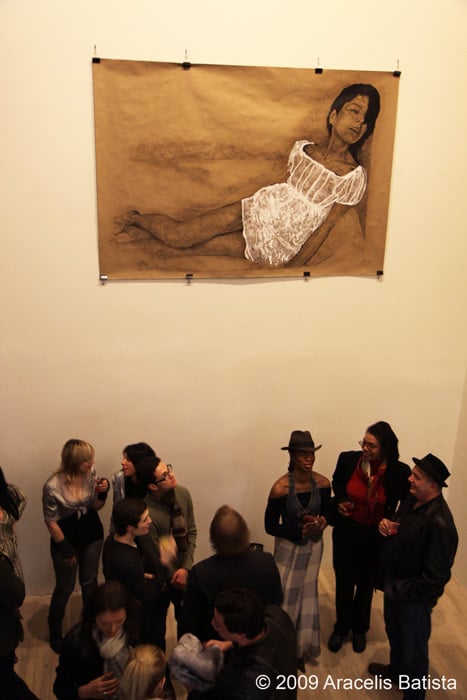 From the Wooster street entrance, one is led to the entrancing spells of the memorialized Mesdames mortelles. Lethal, fatal, mortal are words that symbolize a sort of inevitable break in a mournful end to a passionate journey. Whether the sharp gazes of the angelic eyes begging a response from within dead yet seductive corpses were pointed at you or at Skye is up for interpretation. One thing is for certain, what had started as merely two dimensional works on brown paper began to transform into entrancing illusionist three dimensional flesh tones.

If one were to classify Skye he would fall into the twenty first century impressionists. Most impressionists responded to their swiftly industrializing urban environments by trying to imprison fleeting moments onto canvases as time was becoming more precious as it flowed by with increasing rapidity reminiscent of Dali’s melting clocks. Perhaps Skye is responding to a digitized age in which time is again affected and made almost virtual. Although he is not responding directly to this modified way of life, he is also capturing fleeting essences, the indescribable impulses that guide our emotions. 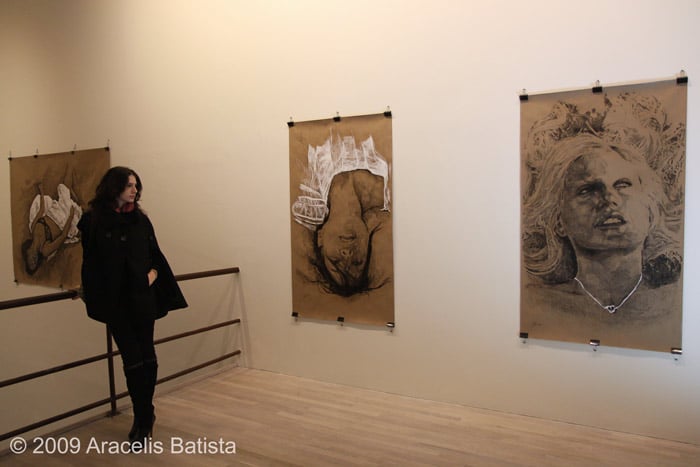 “If the impressionists were alive today, I believe they would be photographers” asserts Skye. And surely, Skye is himself a sort of ‘painterographer.’He snaps pictures of his friend models, such as Zuzanna Krzatala, which he then creates into powerful larger-than-life figures onto the brown paper using white oil pigment and black crayon reminiscent of black and white photographs. This larger than life quality “baits and hooks the viewer’s senses,” as he diagnoses, but also represents the fact that they are not alive anymore. They have gone to another sublime sphere that is too large for our brains to swallow. This sublime sphere which traps the audience member into an imaginative trance digs at every dark corner or our “psyche, where all our secrets and inner perversions roam free,” states Skye. Although the viewer tries to level himself with this extraordinary quality as he stares into of the five femmes, he is grounded by a true impression of their mortal earthly flesh that is created somewhere in between the brown paper and his eyes. 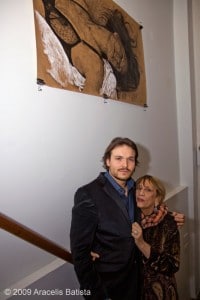 The “Mortelle: Act I” show presented by United Creators and Jules Kirby was in fact a play of its own. Within the room full of static aroused energy, a whole series of Film Noirs were created  in all of the guests’ imaginations, even in Skye’s. “I step out of the role of being the creator once the artwork is displayed…” and like everyone one else, he is free to choose which role he would “like to play within the fictional storyline.”

That Skye levels himself to blend with his audience shows his intentions of making art that is accessible to everyone, a particularly good attitude to have especially in times of recession. With this economic decline, many artists need to become creative in aspects other than their art. Exhibition space in galleries, for example, 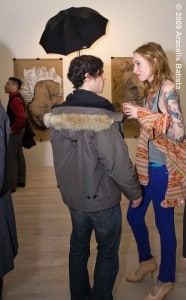 is becoming a luxury. The alternative exhibition of “Mortelle: Act I” at ION space is just a beginning in a necessitated trend which will certainly be followed by artists, collectors, and dealers. New advertising tactics are also emerging, and Skye recognizes this. Since he is interested in fine arts and fashion, for him, “creatively, it would be interesting to see a collaboration between the art world and fashion.”

In the end one can argue that the fatal beauties of “Mortelle: Act I”symbolize our cravings, desires for the ethereal, for self validation in this present life and the next, assuming one exists at all. “…ultimately, the allure is simply inescapable: an irresistible guilty pleasure we just can’t seem to ignore.” With such an inventive mind, Skye’s work promises a desirable journey ahead, even beyond mortality.