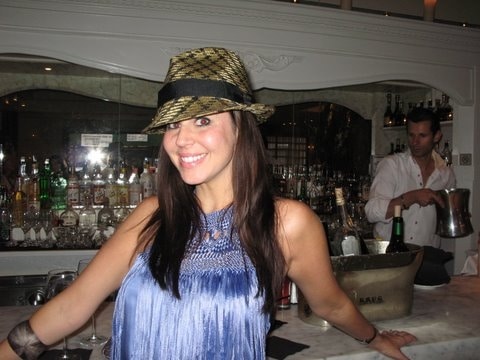 As Fashion Week leaves us cold and clamoring for new clothes, we catch up with Texan-born-and-bred Melissa Foss-Zdyb, Style Expert and writer at Style List. Does the devil really wear Prada? What’s up with Tyra Banks’ forehead? Does fashion stifle women rather than empower them and where is fashion going? As a former Texan myself (is it possible to relinquish the title?) this Scallywag found the former Harper Bazaar’s editor a fun charm. What goes on when you put two Texan New Yorkers together to talk shop? Read on…

SCV: How did you get into magazine editorial?

Melissa: When I was in college I decided that’s what I wanted to do. In Austin I didn’t really have a clue. And I went and applied for an internship at Texas monthly, and I got it and it was great, and they suggested I go to the Rice Publishing program and I did and I met  Steve Florio (Former President and CEO of Conde Nast) and he was so nice to me, he had me come in and talk to him. I actually wore two different shoes to that interview, it was so embarrassing, two different shoes, they were close, but they weren’t the same. He didn’t notice, thank god.  I noticed it on the subway so it was too late. He just introduced me to so many people and it was so great, and I ended up getting a job at Marie Claire.

SCV: Are you a style expert? Is that your title?

Melissa: Well the last desk job I had was at Harper’s Bazaar and I was a Senior Beauty Expert. But I mostly do TV now so I’ve had to break out of just beauty.

SCV: Who is your audience?

Melissa: Everyone of course!

I think my appeal may come from the fact that I’ve worked at a lot of magazines, but I am born and raised in Austin so I understand how the real woman thinks. They’re not probably going to buy a 3000 handbag or spend more than 10 minutes getting ready for work.

SCV: Are some people so inherently unstylish they can’t be helped?

Melissa: Yes! Laughs. It’s a case of just not caring enough. Which some people think they’re sending a message that they’re too smart for it but inevitably that backfires.

SCV: How does one book themselves on the Tyra Banks show? Do they need an agent?

Melissa: Actually I didn’t get that one through an agent. I got it through a producer. You can just pitch ideas, They want to see your reel. What you look like, what your vibe is. But it takes a lot of no’s to get to a yes.

SCV: Is Tyra Banks’ forehead even bigger in person?

SCV: So what shows did you see last week?

SCV: What was your favorite collection?

Melissa: Temperley. It was small and it was a little show in the showroom, but her stuff was so pretty, a little tough mixed with girly, they did it really well.

SCV: What are the rules of etiquette for a fashion show?

Melissa: Don’t steal someone else’s seat until the lights are already down.

SCV: What row do you get seated in?

SCV: Do you buy all new outfits for the week?

Melissa: No. No way. A couple pieces here and there.

SCV: Is it okay to take pics with your camera whilst in the front row?

Melissa: I did that all week long.

SCV: What about text messaging while the models are strutting the runway? (Editor’s note- we caught you Paris Hilton….)

Melissa: Gross. Rude. Not a fan.

SCV: What’s the next hottest trend?

Melissa: Well it was all about the 80’s, which I don’t get, but that was everywhere.

SCV: Do you think the life cycle of a trend is shortening with the advent of internet and production technology?

Melissa: Not yet, but shows are going to start going online. That will happen, but we’re somewhere in the middle of the past and the future, we’re right smack in the middle of it right now.

SCV: Do you get a lot of swag?

Melissa: I get some swag, uh huh.

SCV: Does it all feel a bit inappropriate now?

Melissa: No because I think people forget that this is a business, just like every other business. As long as it’s not ostentatious and just disturbing. As long as it’s done in the realm of good taste, it has to go on. It’s a part of every single person, getting dressed. I’m a big anti-fur person though. To me it’s the perfect time to get even further away from that. So not cool.

SCV: Do you think diffusion lines make a designer too accessible, thereby making them less desirable at the high end?

Melissa: That’s a timely question. Not right now. Maybe in four or five years that will be the case, but right now it’s a smart move. As long as you differentiate it enough. I mean we have Alexander McQueen doing a line for Target.

SCV: Do you think Vera Wang has sort of lost her cache because she’s at Kohl’s?

Melissa: With women who appear on the pages of Vogue, perhaps, but that’s very, very few people when you break it down. If you want to succeed you’re going to have to extend your reach a bit.

SCV: What one piece in your closet do you turn to most?

Melissa: Let’s see, my skinny dark washed jeans by J Brand. Too often. I need to break myself of that.

SCV: Do you think the current economic circumstances have shifted our focus on fashion?

Melissa: It doesn’t seem like it from where I’m sitting.

SCV: How much time do you spend getting dressed in the morning?

Melissa: It depends. I’m a freelancer, so if I have to go somewhere, it varies from zero minutes to an hour. That includes shower, getting dressed, checking emails, drinking coffee, walking my dog, the whole thing.

SCV: Fashion is about newness. How do u stay in fashion without spending?

Melissa: Laughs. You can spend very little by freshening up a look. For example by adding a studded belt or something. I mean that’s saving my Spring wardrobe from last season. The studded belt. I’m obsessed with it. It’s changing the look of everything. Little dresses, over jackets, everything looks new. Newer than if I didn’t have it, let’s say.

SCV: Are models bitches? (note the Editor- Scallywag was alarmed because he thought everyone knew the answer to that question…)

Melissa: Laughs. Some are. Some aren’t just like normal people. Most of the time they’re too young to really know what they are yet.

SCV: Do you feel an extreme pressure to be thin being in fashion?

Melissa: I think I feel pressure to be healthy more than anything else. I know that sounds a little trite. But you just look better and feel better when you’re eating right. So I guess so.

SCV: Does the emphasis the fashion industry places on youth beauty and thinness stifle the very women it caters to?

Melissa: At Harper’s Bazaar we used to get lots of letters about all the models being 14 and a size negative 0. But people want to look at people who look like that. So plus size models, show about losing weight, people don’t end up buying those. They say they want to but they don’t.

SCV: Tell me about your reality show for the Golden Globes.

Melissa: We’re doing this thing called Fab or faux-pas. That was the pilot.

SCV: Why is celebrity so important?

SCV: Do you strive for fame?

Melissa: I think it’s more professional respect. I’ve said no to several things that would have made me more famous but they wouldn’t have been smart things for longevity.

Melissa: Laughs (tongue in cheek)yeah they were begging me to be on American Idol.  I said no to The Surreal Life, The Bachelorette.. they were devastated.

SCV: Do you love yourself more when the media pays attention to you?

SCV: Did you ever think you might want to do something more serious?

Melissa: You know one of the best things I’ve done, in May 2007, I put on a fashion show with Tim Gunn as my co-host it was called Project Ruffway and it was a fashion show with guys walking down the runway with stray dogs, all the dogs got adopted and every penny went to Straight From the Heart. Once you get established in the industry you have to be passionate about something else. So just because you’re in the industry does not mean you’re a serious-minded person. You can use it for good, not evil.

SCV: Does being fabulous ever get old?

Melissa: (laughing) Never! People know that this is meant in funny ways, right?

Melissa: Ok good, I’m trying to respond the way I would want someone to respond when the situation’s in reverse.

SCV: Do you ever get sick of clothes?

Melissa: Yes I do. It’s like working at a candy factory. You get sick of the candy sometimes.

SCV: Is fashion really about freedom of expression or is it more about following and breaking the rules according to the zeitgeist?

Melissa: (Long pause). It’s really kind of your relationship with yourself I think. Although, it’s sort of sad, you do get judged by your armor. It depends on what you’re trying to go for. If you’re dating it’s different than if you’re going to interview for a job. That’s the good thing about fashion, you can change so quickly. From the outside. Even though you’re always the same person, no matter what.

Melissa: The shoe issue. With Steve Florio. Who was the President of Conde Nast at the time. Two different shoes. I was interviewing for a fashion job so…

SCV: Of course if we were still in Texas that wouldn’t be an issue?

Melissa: (laughing) Of course not…