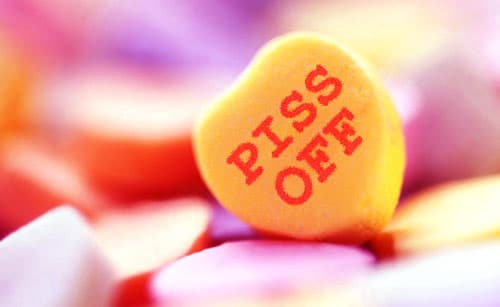 First of all, the day doesn’t hold much significance.  Well, it does and it doesn’t.  It does because of the jerky couples making out everywhere, and their fake happiness can serve as a painful reminder that today especially, you don’t have that fake kind of happiness. It doesn’t because hopefully you realize that, well, it’s a hallmark holiday, tied more to money than anything else.  Be that as it may, when all your friends are paired up, and you’re forced to work that Saturday night waitressing, what can you do to keep yourself amused? Well this year, cupid shot that arrow straight into my backside.  I think it may have been laced with some sort of “forget-me-now” drug, because when I woke up groggy, these things seemed like a good idea:

4.   Go hunting. Nothing like shooting Bambi in the head on the day of love (and we mean the deer, not the tramp your boyfriend cheated on you with last V-Day, that would be crazy).

5.    Eat steak frites, meat as raw as your own bloodied heart.

6.    Do a graffiti collage about all the things wrong in your life.  Sometimes seeing your problems and weaknesses in front of you gives you clarity.  Although we’d recommend using an actual canvas.  Spray painting “motherfucker” on the side of your exes car will probably get you into some kind of trouble with the law.  Unless you’re using the cloak of nightfall.

7.    Do your best friend a favour: make out with her boyfriend.  It’ll prove to her that love doesn’t exist, and you’d really be saving her a heap of trouble later.  It’s better that he cheats with someone she trusts, not some stripper he could get the Herp from.